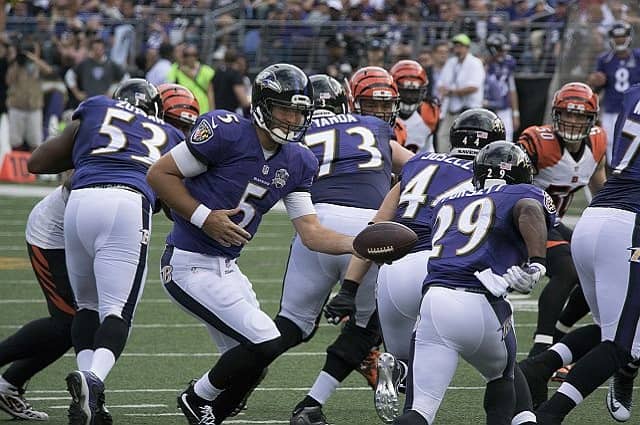 The Baltimore Ravens have been one of the most successful franchises in the NFL since owner Art Modell relocated the team from Cleveland in 1996.

The Ravens have made 13 playoff appearances, won six division titles, and have been crowned Super Bowl champions twice (2000, 2012).

While the team has always been known for its hard-nosed defensive style, there’s no question that winning starts and ends at quarterback. QB is arguably the most important position in all of sports, and Baltimore has had some good ones through the years. Here’s a look at the top five quarterbacks in Baltimore Ravens history.

Trent Dilfer is on this list for one reason and one reason only – he won a Super Bowl. Dilfer was never known to have an elite skill set, but all he had to do in Baltimore was manage the game and not make any egregious errors. He was only there for one year (and only started eight games) but had a 7-1 regular season record before going on to win it all.

The Ravens had one of the best defenses in NFL history in 2000 and ended up winning the Super Bowl 34-7 over the New York Giants. New York’s only touchdown came on a 97-yard kickoff return for a touchdown Dilfer finished his career with a 58-55 overall record.

Kyle Boller sits third all-time in Ravens passing yards with 7,846. In his five seasons with Baltimore, Boller was 20-22 as a starter, with a 56.9 completion percentage to go with 45 touchdowns and 44 interceptions.

While the numbers aren’t stellar, he did lead the team to two division championships in 2003 and 2006. Boller never won another game as a starter after his time in Baltimore, and his career sputtered out with short stints in St. Louis and Oakland. He finished his career with a 20-27 record as a starter.

Vinny Testaverde was the first starting quarterback for the Baltimore Ravens back in 1996 and still has the fourth most passing yards in the team’s history (7,148). We’re often blown away to see Tom Brady still playing QB at age 45, but not many people remember that Testaverde was a starter until he was 44 years old in a career that spanned 21 years.

He was only a Raven for two seasons, so to still be fourth in passing yards after all these years is impressive. Baltimore had some growing pains in the late 90s before it found its footing, and Testaverde didn’t reach the playoffs during his tenure. Nevertheless, he left his mark and will always be remembered as the team’s first QB and one of its best.

It’s without question that Baltimore’s current quarterback Lamar Jackson is the most talented QB the team has ever had. He’s already second in all-time passing yards and will likely shatter every record in franchise history if he stays with the Ravens long-term. All Jackson does is win. He’s now in his fifth season with Baltimore and, as of this writing, has a career-winning percentage of over .765.

He already has an MVP under his belt and has been to the playoffs in three of his first four seasons – including two division titles. Jackson has close to a 3-1 touchdown to interception ratio but is just as dangerous with his legs. As one of the fastest players in the NFL, he’s rushed for over 4,000 yards in his career, including two 1,000-yard seasons.

Joe Flacco’s best days are behind him, but his legendary status in Baltimore will live forever. He’s far and away the team’s leading passer (38,245 yards) and has thrown over 100 more touchdowns than anyone else in team history. He played 11 seasons for the Ravens, with the pinnacle coming in 2012 with the franchise’s second Super Bowl championship where he was named Super Bowl MVP.

He earned a reputation as a big-game player through his outstanding playoff performances. In 15 playoff games, Flacco compiled a 10-5 record and threw for 3,223 yards with 25 TDs and only 10 picks. When it was all said and done, Flacco finished his time in Baltimore with a 96-67 record as a starter.

Maryland is poised to launch online betting by Super Bowl at the latest, and possibly even before the end of 2022. When that happens, sports bettors will be able to take advantage of an excellent welcome bonus using this Caesars Sportsbook Maryland promo code.