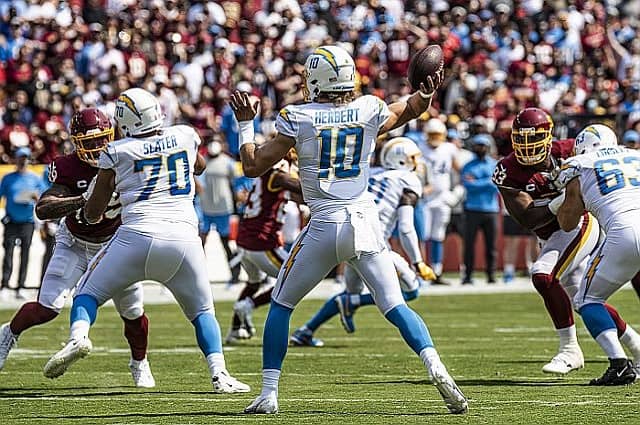 It’s time to cue up the Monday Night Football theme song, watch those highlights that get you amped, and prepare for the 2022 NFL season. We had an incredible season to watch in 2021 including a few playoff games that may go down as all-time classics. There is an exciting rookie class coming into the league, TONS of star players flipped teams, and the action should be second to none. We’re here to hand out divisional previews. Here’s our 2022 AFC West preview.

This division was so much fun to watch in 2022 as the Kansas City Chiefs seemed to hit a mid-season lull before turning it on late in the year and claiming another division title. It seems like the LA Chargers are going to be the team to watch over the next few years as QB Justin Herbert develops into a star and sparks a rivalry between him and Pat Mahomes for the best gunslinger in the West. While the Chiefs won the division, the Las Vegas Raiders were the second playoff team, beating the Chargers in the final week of the season to eliminate them. Vegas had to endure a horrible team incident when their star wide receiver was arrested for manslaughter and then head coach Jon Gruden was fired midseason. They still bounced back and nearly upset Cincinnati in the playoffs. LA had a fun year and nearly cracked into the postseason, but it came up just short. Denver, on the other hand, had a tough season with Teddy Bridgewater at quarterback.

The Chiefs are favored to win the division, but every team made at least one sizeable investment in a star player to make themselves better. The Chargers added one of the best defensive players in the game in LB Khalil Mack to shore up an already talented defense. The Raiders traded for WR Davante Adams who now pairs with his former college QB Derek Carr and hired away Josh McDaniels from New England to be head coach. Denver, in maybe the biggest move, traded for QB Russell Wilson as they finally have an answer to the other top QBs in the division. The Chiefs lost WR Tyreek Hill and that will leave a hole in their offense. They may be favored, but this division should be tight and will probably take all 18 weeks to determine a winner.

This is the biggest movie of the offseason in this division. The Broncos haven’t had a steady hand at QB since Peyton Manning left and Russ can bring some consistency. He had a down year in 2021, but if he is fully healthy, they could compete for a division title.

This was an underrated move by the Chargers who also made some big free agent splashes. Mack is one of the best defenders in the NFL and he will bring a veteran presence to that side of the ball which is desperately needed.

I believe that this is the year a team dethrones the Chiefs, and I am leaning towards the Chargers. This won’t be a division where a team wins more than 12 games, but Justin Herbert can have his breakout season and get his team as close as he can. Record: Chargers 11-6