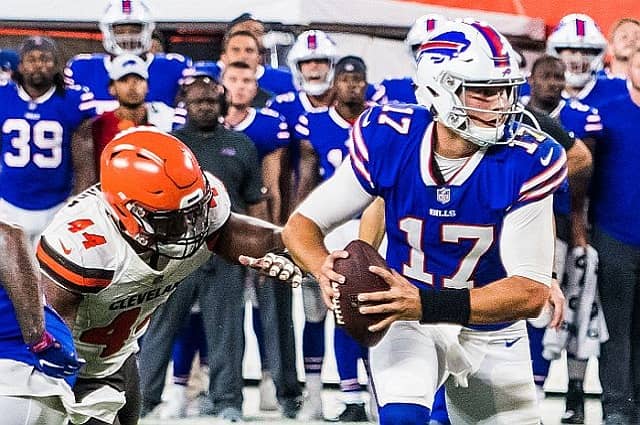 It’s time to cue up the Monday Night Football theme song, watch those highlights that get you amped, and prepare for the 2022 NFL season. We had an incredible season to watch in 2021 including a few playoff games that may go down as all-time classics. There is an exciting rookie class coming into the league, TONS of star players flipped teams, and the action should be second to none. We’re here to hand out divisional previews. Here’s our 2022 AFC East preview.

The Buffalo Bills reigned supreme for the second straight season in the AFC East as QB Josh Allen developed into one of the best quarterbacks in the game. The Bills had a nice playoff run that came up just short after an all-time great matchup against the Kansas City Chiefs. Behind them were the New England Patriots who seemed to be rejuvenated by rookie quarterback Mac Jones and a roster that was completely overhauled last offseason. The Pats were back in the playoffs but were booted in embarrassing fashion by Buffalo. The Miami Dolphins had their bright spots, but they couldn’t finish the job down the stretch and ended up firing head coach Brian Flores. As for the NY Jets, there were lows and highs, but a whole lot more lows in QB Zach Wilson’s rookie season under first-year head coach Robert Saleh.

The Bills aren’t just the favorites to win the AFC East, they are the favorites to win the Super Bowl, according to the betting odds. Allen can lead this offense to new heights as they are scoring points at will and even getting the running game involved. On top of that, the Bills strength is their defense and head coach Sean McDermott specializes in that area. For as good as this team has been the last two years, adding future Hall-of-Fame LB Von Miller and having another year together will only benefit them.

The Dolphins shocked the NFL by trading for Hill, but it came with a massive price tag and it will add a ton of pressure on QB Tua Tagovailoa who doesn’t seem to be a front office favorite as is. Hill is the most dynamic wide receiver in the league and if he can’t help Tua open up this offense, I just don’t know who possibly could. I can’t wait to watch him flashing down the field in teal.

Miller should still have plenty in the tank, especially as he comes off his second Super Bowl victory, this time with the Los Angeles Rams. Miller could be the missing piece on this Bills team that gets them just over the hump and finally back to the Super Bowl.

This one is easy, it’s the Bills. They should have no real issue blowing by any team in this division. While I think that Miami and New England could win upwards of 9 to 10 games, I still think the Bills could command the best record in the NFL. Record (13-4)