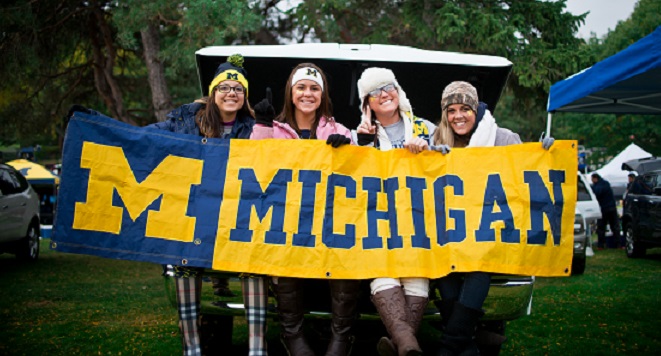 On a typical game day in Ann Arbor, Michigan, the population of this 113,000-resident city more than doubles. Heck, Michigan Stadium, the largest stadium in the nation with a capacity of just under 108,000, can house enough people to qualify it as the seventh largest city in the state. In other words, Wolverine football is a big damn deal in Ann Arbor.

Combining a near-rabid passion for one of college football’s most storied programs with old-fashioned Midwest hospitality, the University of Michigan is truly one of the best college football experiences in the country.

“There is nowhere else in the country like a game day in Michigan for Wolverine football,” says Laura Beraducci, a lifelong resident of Ann Arbor and the Director of Marketing for the Ann Arbor Area Convention and Visitors Bureau. “It’s fun, it’s exhilarating, and it’s hilarious. It’s just a good time, especially when we’re winning.”

Beraducci’s father and his brother grew up in a home within walking distance of Michigan Stadium where they earned extra dough in the old days parking cars on game days. The home is now owned by Beraducci’s uncle and serves as her home base on Saturdays. “It’s all about the grilling, the food, the music, and about meeting new people, more than anything else. You never know who you’re going to meet at a Michigan tailgate,” she says. “These days I walk over from my uncle’s house, usually with a cooler or two, depending on how many people are with me, and we tailgate hop.”

Michigan’s appeal reaches far and wide. Each weekend a group of tailgaters arrives via AmTrak from Chicago – no doubt getting the festivities started early on the train – and a group of dedicated Canucks, the Blue Loonies, make the trip from Canada with their maize and blue Canadian flag flying high and proud. Out-of-towners, Berdaucci says, are more than welcome, even if they’re supporters of arch rival Michigan State or Ohio State.

But regardless of the team logo emblazoned on the t-shirt or ball cap, an Ann Arbor joint named Zingerman’s Deli is a fave among locals and guests alike.

“On game day weekends, we get more phone calls asking for directions to Zingerman’s Deli, and the line literally goes around the block,” Beraducci says. “It’s a party there.”

There’s a party around every corner at Michigan.