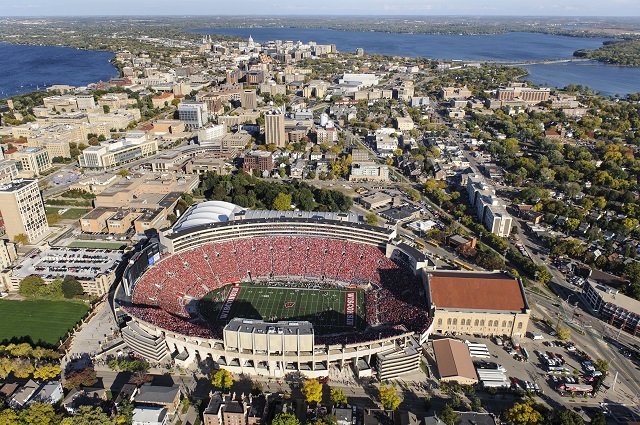 Objectively, the Badgers just finished off their sixth 10-win season in the last eight years, but honestly, the fans would be there for the festivities even if they resided at the bottom of the Big 10. This special campus the locals have named “Madtown” takes on a whole other persona once the leaves start falling in Madison.

An ocean of bright red and white covers the campus and the capital city, but under those tents lie dishes that rival even the most tantalizing of spreads. One won’t find a longer list of sausage, kielbasa and bratwurst available this side of Germany.

Camp Randall Stadium is mere steps from student housing, which makes for an ideal tailgating atmosphere ranking with the top tier locations in the U.S. UW is simply a tailgating original and would slide into our top five easily if not for some hard chargers ahead.

Many tailgaters start their day at the local farmer’s market in Madison’s Capital Square to gather supplies. (It doesn’t get more farm-to-table than this.) From there, some head to Union Square (a cheese head favorite), where fans congregate before heading to the players’ Arch March into the stadium, one of the University’s newest traditions. Then it’s time to rush into Camp Randall for another boisterous event that UW fans hope will end in another Badgers victory. Assuming Wisconsin wins the day, they might roll on over to State Street, where the party is just getting started.