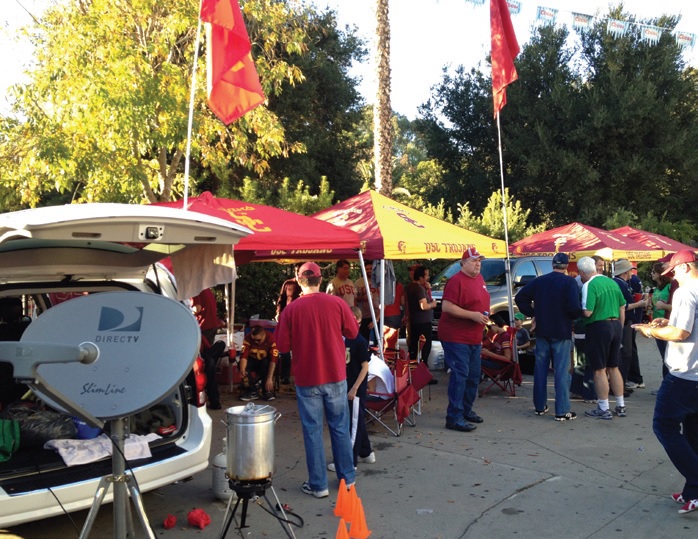 courtesy of University of Southern California

You know your college has a great football history when it’s forced to build a public space just to showcase and share the school’s Heisman Trophies, loot and bling from bowl games, and various rivalry winnings. Heritage Hall was built in 1971 as a shrine to the University of Southern California football team and their winning ways.

Fans love their traditions and superstitions, and USC has many to offer. Kicking the Pole is a longtime tradition that doesn’t have an origin story, but all it involves is kicking any one of three poles in front of Exposition Blvd as you exit campus via Trousdale heading toward the Coliseum. Fans kick the pole for good luck, and the clanking sounds produced are as much as part of the game day atmosphere as the cheers, chants and USC fight song.

USC is home to some of the most iconic images in college football, one being the USC drum major. Clad in full Trojan gear, the drum major marches onto the field alone, stabs the turf with his sword then directs the band onto the field.

Before the beginning of the fourth quarter, fans can enjoy two traditions in one. Traveler, the all-white horse, and the Trojan rider burst onto the field while the band plays their version of the William Tell Overture. This signals the lighting of the Olympic Torch.

USC is one of only three stadiums to host the Olympic Games, and the only one to host it twice. Whether this moment is a rallying point for a fourth quarter surge or the first strains of a victory cheer, it is a moment that will not be forgotten.