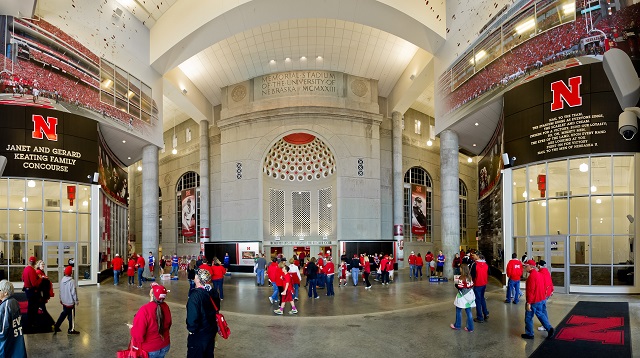 In some places, football is like religion. In Nebraska, it’s like going to church. The fans are notoriously friendly.

Nebraska alumnus Randy Essex visited Lincoln for several games while he lived in Iowa. He’d drive into town in a car adorned with Iowa plates, and that only garnered more kindness from his fellow fans.

“Twice, I had notes on my windshield that said, ‘enjoy your visit,’” he recalls. “It’s wholesomeness. You sort of forget what a machine it’s become and how the program slipped from greatness to mediocrity in recent years.”

That may lead to an atmosphere that Essex says is a bit tame for his liking since his college days were filled with the promise of championships and an electric atmosphere. But fellow fan Zach Buch says the environment still gives him goosebumps.

On game days, campus is a sea of red. A sold-out game means the 84,047-seat Memorial Stadium is more populous than the state’s third-largest city. (Bellevue clocks in at just more than 50,000 residents.) And that’s not just a sometimes sort of thing; the Huskers have sold out each home game since Nov. 3, 1962, when they lost homecoming to Missouri. The streak is now at 354 games, the NCAA’s longest.

“It’s very loud but also very respectful, not a lot of swearing,” Burch says. “We have no pro teams, so most put all their effort into the Cornhuskers.”

If you find your way to Lincoln, join in the fun. Make your way from the tailgate to Kimball Recital Hall, where the University of Nebraska Marching Band performs a pregame concert. Then join the fans as they stream toward the stadium. Whether you’re a Husker or not, you’ll be welcomed.