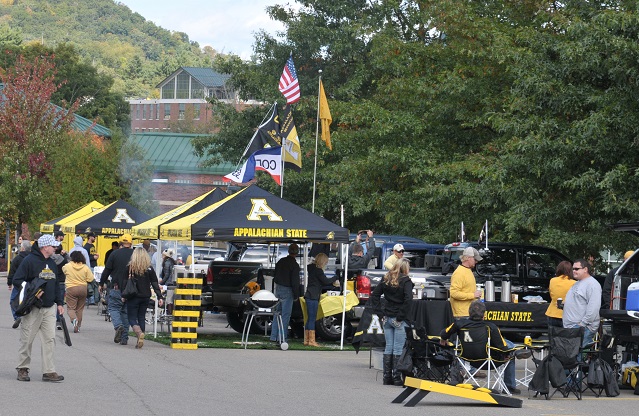 Another year has come and gone, and the Mountaineers continue their climb in our rankings. ASU made their Division 1 debut two seasons ago, and all they’ve done is turn in two double-digit win seasons. After taking the Sun Belt Conference once more, there’s never been more reasons to make the trek into the mountains of Boone, North Carolina for a truly unique tailgating experience.

ASU will kick things off in primetime against their second consecutive Week One SEC opponent at the University of Georgia. They’ll play host to yet another ACC opponent in fellow North Carolina resident Wake Forest three weeks later on September 23.

ASU recently enhanced their pregame activities, including their Mountaineer Walk on game days and Thursday night tailgates with live entertainment and prizes for students and fans.

“It is not just rowdy students in one section and older alumni in another. Everyone is together mingling and meeting each other. Additionally, App football games in Late October can’t be beat when it comes scenery,” says ASU alumnus Luke Otto. “It’s peak season for the leaves that time of year and Boone, as well as the rest of western NC, is arguably one of the most gorgeous places in the country during that season.”

ASU is a great place on game days for rookies and tailgate pros alike. Trunk or Treat games for Halloween and bringing in military and first responder vehicles for the fans to check out on Heroes Day are just some of the attractions you can expect to see this fall. ASU also has the Junior Mountaineer Kids Club and the Yosef Club for hardcore tailgaters. It’s not too late to jump on the Mountaineer’s bandwagon, but hurry. Space is filling up fast!