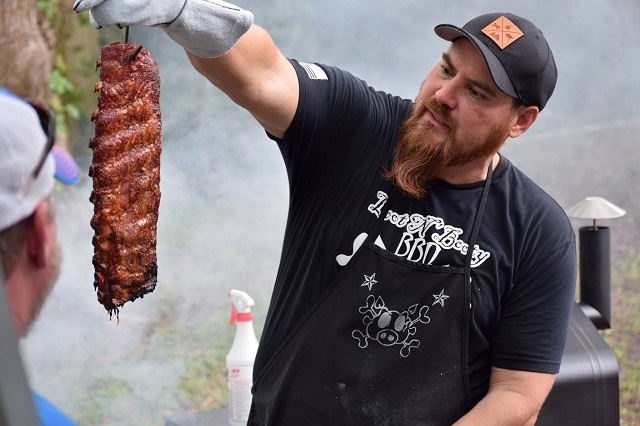 It started with Sterling Smith as a finance guy working for a bank in Arizona. Then he got hit with the competition barbecue bug, won big, and ended up starting his own rubs and sauces business. Now he reps for grill companies, teaches barbecue classes, stars in instructional videos, and taught meat at a university.

What university teaches meat? At Texas Tech University. They have a meat college, and I taught a meat science class there. It’s beef country, after all.

Does meat science weigh into choosing a good rub? Beef. Chicken. Pork. They’re very different—different proteins, different muscle structure. So my rubs are formulated to take those proteins and help them out a little bit. The animal also ate different things, so they’re going to taste different. That being said, you want something that will complement and accent that flavor. Pork is a sweet meat so brown sugars go really well with pork. When you’re talking about chicken, it needs to be woken up, so salts are pretty prevalent, herbs, citrus notes, and some back-end heat. Then beef partners with salt and pepper. Worcestershire complements beef well too. Salt goes well with everything.

Are rubs the secret to championship barbecue? There’s not really a secret. It’s attention to detail. It’s time. If I’m going to submit chicken to the judges, I’m going to make sure you taste chicken number one and then a balance of flavor. That’s what it’s all about in barbecue competition, you want a balance—not too smoky, too sweet, too salty, too anything. Everything works together.

1. Look for a thick rack, well marbled, straight bones, and no shiners (when the bone sticks through the topside of the meat).

3.  Keep a clean fire—little to light smoke, nothing billowy.

4.  There’s three stages: over the open flame, wrapped in foil, and the saucing (see recipe).

5.  Spray with water if the ribs start to get too dark and dry in the first stage.

6.  Use apple juice in your wrap to keep the sugary concoction a liquid instead of a syrup.

7.  When you can slip a meat probe between the bones as easily as warm butter, unwrap them.

8. Basting then smoking for a final ten minutes sets the sauce without burning it or getting gloopy.

What’s your trophy shelf look like? I’ve been competing on the professional BBQ circuit since 2009 and amassed over 300 top ten trophies.   I have won 31 Grand and Reserve Grand Championships, which means first and second place overall. For four years in a row, I’ve been at the American Royal World Series of Barbecue, which is basically the world series of barbecue held annually in Kansas City. In 2014 was the first year I qualified, and there were 170 grand champion teams there. I took first place in chicken with a perfect score. It’s called a perfect 180—the highest you can get in the Kansas City Barbecue Society. I’ve had 9 perfect 180 scores since then.

Bet you own a lot of grills. Oh man, [he starts counting out his window]…one…two…three…four…probably at least a dozen. I have one propane one in the back corner of my yard. It pretty much just holds up a cover.

What’s the tool most grillers don’t use, but should? Gloves. I use my hands a lot as opposed to utensils. It’s not like I have big gnarly gloves or anything. I use knit cotton gloves under some black disposable latex gloves. The cotton will protect me from the heat, and the latex gloves are so I don’t get cotton threads on the meat. I’ll touch it, move it. I have dexterity and can feel everything. I can’t do that with tongs. In competition, I want to feel the bark and I can’t control that with tongs. I don’t think I have feeling in the ends of my fingertips anymore.

Did you ever make a big mistake? I do it all the time. Even in competition, I’m a risk-taker, adventurous. I’ve thrown some different flavors in just to see what judges think, and I’ve gotten a score that reflected they didn’t like it. If it doesn’t work, you learned. I know my first attempt on the grill was a big mistake. I pulled that pork butt off and it was like a piece of charcoal.

What went wrong? I thought you needed a lot of smoke coming from your smoker, billowing out. That’s in fact, not a clean fire. Good barbecue is about a clean smoke, not just about the recipe. You should see light blue smoke or not really see any smoke at all.

Does your grill affect a clean smoke? All smokers are good, you just have to know how to maintain your smoker and know the hot spots and how to use them to your advantage. Then every smoker can be a good smoker—or grill. Like brisket has a big point, so put that point toward your hot spots. All meat is not made equal.

What’s the most misunderstood thing by most grillers about meat? They put seasonings on a piece of meat and start grilling right away, and that’s pretty much a waste of seasoning. Seasoning needs time to penetrate the proteins, and the meat to sweat and accept the flavors, accept the salt. By doing that, you have a much more flavorful and moister piece of meat because that salt will retain moisture. That’s why I season in advance, sometimes overnight. Burgers or steak are shorter, though. But I still do a minimum of an hour in advance on those.

Favorite thing to grill? Ribs. I love pork ribs. I’m a rib guy. I think they can be done in so many ways. And they melt in your mouth. The porkiness, the fat and smoke come together and it creates amazing flavor. It’s the best eating.

What’s the difference between a competition pit master and a backyard griller? Nothing. Every championship pit master is a backyard barbecuer, and every barbecuer can be a pit master. It’s just taking it to the next level.