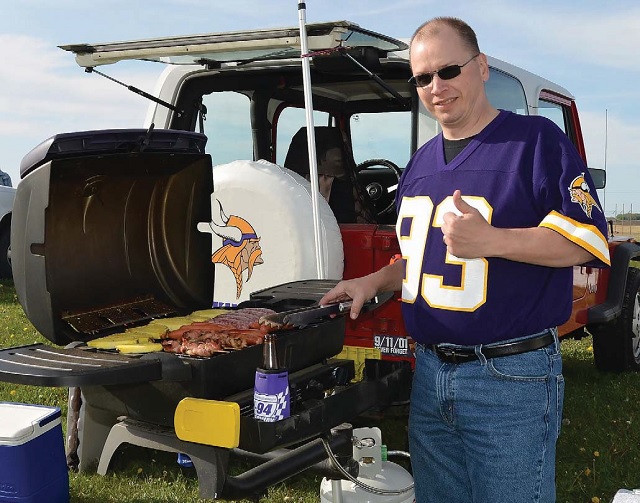 Scott Backstrom, a website designer in Minnesota, lives in the tiny burg of Pelican Rapids amid a population of 2,500. But for a sports fan, it’s strategically located about an hour from Fargo and the five-time championship North Dakota State Bison and about three hours from the Vikings’ stadium. “I’m a Vikings fan first and foremost,” says the former season-ticket holder and current member of the Viking World Order fan club, charity organization, and tailgating Valhalla. He’s just as avid about grilling.

Did the grilling start with tailgating?  I got into grilling naturally. I love food, but I’m cheap. I like food, but I like it the way I like it. And I love experimenting with different spices, making the meat better.

So you create your own rubs?  My wife laughs at me, and swears I have a Frankenstein monster lab with test tubes and bottles where I put together secret spices. I just take what I know works. Ideally you want the rub or spice to enhance the natural flavor of the meat, not cover it up, like barbecue sauce does — and I love barbecue sauce. If you put the right barbecue sauce on a shoestring, I’d eat it.

Didn’t you make a rub called Tears of our Rivals? Because everything tastes better with the tears of our rivals. I have another one called Victory Formation — because then everybody knows you’ve already won.

How many grills/smokers do you own?  I have five different portable grills and one smoker. I don’t bring the smoker anywhere. But my grills are pretty obvious, because mine are painted purple.

Charcoal or gas?  I’m a gas guy and, again, that’s because I’m lazy. I work out of town. When I get home it’s already after 6. I fire it up, and it’s going in five minutes. When tailgating, it’s always gas from the clean-up aspect, and the Vikings don’t allow charcoal.

Favorite BBQ tool?  A sharp knife. Very, very good tool, because you can test things, use it to flip and move stuff around, cut off a little bit — because if you don’t sample, you’re not doing a good job.

1  Cook meat and vegetables on different skewers. Otherwise, the meat isn’t cooked enough and the veg gets soggy.

2  Mix fruit with meat on the same kabob. You can’t overcook fruit, and that flavor meshes with the meat.

3  Simplest kabob is bacon and pineapple. Weave the piece of bacon back and forth around chunks of pineapple. Cook over 250 degrees for about 15 min.

4  If you have a kettle grill, get the round skewers. You can fit more.

5  Wooden skewers are better. But only because they’re disposable.

6  Use two skewers per kabob with a thumbs-width space between them. Veggies stay on better.

What’s with your love of kabobs?  I think I like them because I like tasting different things. You can make lots of different kinds of kabobs and mix them together, and people can pick what they want. I have a niece who’s a vegetarian and I can do a whole veggie kabob. If you’re a meatatarian — it’s a lifestyle choice — you can have four different kinds of marinated chicken on one kabob.

What’s a go-to kabob combo?  Take a mushroom cap, about quarter size. Inside the cap, put in a slice of jalapeno. On top of that, put in brown sugar. Wrap that in bacon to hold it all in and fill a skewer. They’re hot, sweet, salty, frickin’ delicious.

Is there a secret combo of flavors?  The four magic B’s. Beer, butter, bacon, and brown sugar. If you can combine two or more of those in a product, it’s probably going to be pretty good.

Favorite cut of meat?  I have never met a dead pig I didn’t like. What is there not to love? I really love baby back ribs. And anything wrapped in bacon. There really is no bad pig — maybe not the brains and feet…well, maybe if they put them in a hotdog.

What was your biggest grilling mistake?  That’s easy. I set my grill on fire, twice. You’d think I’d learn. It was about a 90-degree day, and I was heating up oil in a shallow pan on the grill. I didn’t really figure the time it would take to get up to full heat. I walked away to prep stuff, and came back to my grill in full fire mode. On a positive note, I can see farther south now off my deck with the natural trimming of my tree that occurred.

1 cup mixture of garlic powder, salt and pepper (I use my Tears of Our Rivals rub)

Slice potatoes into wedges (lengthwise). One potato should make four wedges. Insert skewers into one end of wedges, like a popsicle. Depending on length, you may wish to use only half a skewer for each.

Brush the wedges with olive oil and heavily season them with the spice mixture. Then wrap each one with a piece of bacon using toothpicks to hold the bacon in place, if needed.

Place the wedges on the top rack of smoker and smoke for 3 hours at 225F or on grill over indirect heat (where there are no coals or lit burners beneath them) for about 1.5 hours until bacon looks done.

Serve warm with dipping sauces, such as cheese, barbecue sauce, or sour cream. Or baste with barbecue sauce just prior to removing from heat.

Most surprising thing to grill?  I was surprised how well fruits come out grilled. It is amazing if you take a peach and cut it in half and put it on the grill, pull it off, quarter it, and put a scoop of ice-cream on it. You will think you have gone to heaven, especially on a hot August night outside the stadium. You don’t have to add nothing.

What’s the most difficult thing you had to learn about grilling?  To take my time. That was probably the hardest thing for me to comprehend. If the doctor says take two and call him in the morning, I’ll take four. But that’s not the way to get to your end result faster in barbecuing. If I could teach anyone anything, the lower and slower you can do it, the better it will be. Enjoy the experience.