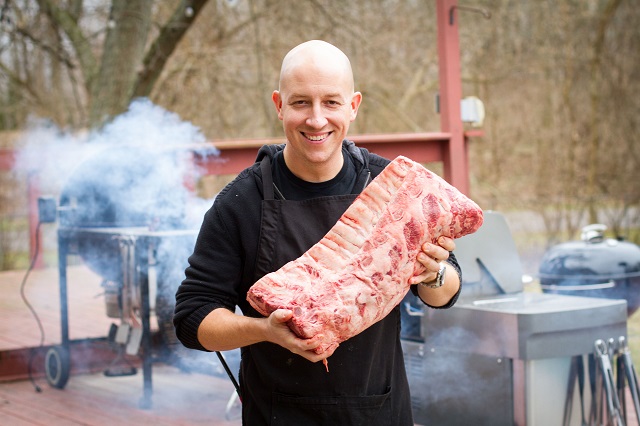 By day, Sergeant Mike Lang polices Dayton, Ohio.  By night, he’s taming flames on his fleet of Weber grills. He’s spent years honing his love of backyard grilling (and brewing craft beers) alongside his other passion of wielding a camera lens. Now Lang guest blogs for Weber, sells his grilling photos and even travels to events as Weber’s official griller. He loves his grates!

What’s the most difficult thing you had to learn About grilling?

How to manage an entire meal on one grill. The trick is timing. You’re doing proteins and a few sides all at once, and you have to get everything off the grill at the same time—and have it be good.

Rib eye. It’s all about the right combo of muscle fiber and fat. A strip is dense, meaty. And some people like fi lets because they’re so soft, but they’re also pretty much devoid of flavor because they’re so lean. But the rib eye is a perfect marriage of meat and fat, and whenever I have one, I’m always satisfied.

Most surprising thing you ever grilled?

A hog’s stomach. I forget how it came about but basically the stomach’s a vessel for pork and other root vegetables. That part was good. If I remember right, basically it was pork and carrots, potatoes, and onions, and you seal it up with butcher twine, and you grill it indirectly so it bakes. You eat the entire thing. The stomach was very tough. It’s called Hog Maw. The hardest part about doing it was going to the butcher and getting it ordered. It sounds awesome, but it wasn’t that great. It was just different than saying we were having a roast.

A pair of tongs. They can do anything. I can flip a steak, move a chicken, I could even hold a beer. If I could replace my arm with anything mechanical, I’d probably ask for tongs.

7 Tips for Grilling with Beer

2.  Cook in beer, and not just brats. If you’re braising beef, do it in beer. Try a darker lager like a dunkel [very malty with a gentle hop accent for very little bitterness.] Using beer adds a little something more without being overpowering.

3.  The best use for a beer can is inside a chicken. It doesn’t really add anything to the chicken, but it looks good on the grill.

4.  Baste in beer. If you’re smoking a pork shoulder or brisket, beer’s great to add moisture without too much flavor. Use something that’s malty. Not an ale because they’re hoppy, and that adds bitterness. ESBs are great. [Extra special bitter is a beer style known for balance and the interplay between malt and hop bitterness].

5.  Soak wood chips in beer. It adds another layer of flavor. Try a lager or maybe a European pilsner [a pale lager with light, clear color and a slightly sweet taste.]

6.  Marinate in beer. I love to grill skewers of meat and beer matches those very nicely. Marinades are usually a neutral, like olive oil, paired with some sort of acid, like vinegar, to break down the muscle tissue. Replace the acid with beer. Try a stout or porter. A big beer with a lot of roasted malts adds a real meaty kick to the finished dish.

7.  There’s a lot of fuss about pairing certain meats with certain beers, but I say go with what you like. It’s your mouth that should make the decision

What’s the barbecue tool most people don’t use but should?

What did you say you use to move charcoal?

A hoe. Like from the garden. Because it’s important to be able to move charcoal briquettes around the kettle, and a hoe works really well.

Any unusual tools you use in addition to the grill?

I love using a wok on the grill. They’re made for high heat, and you certainly get that on your grill. So if you’re a fan of curries or stir fry or anything that requires high heat, the grill and the wok are perfect.

The biggest mistake you’ve made on the grill?

Isn’t the plank supposed to be a buffer from the direct flames?

The plank does protect, until you forget what the hell you’re doing, and it turns into a fiery raft that destroys your meal.

1 double-bone pork chop (this works with any pork chop, but the double bone looks awesome)

1 wood plank (I used red oak but anything will work)

SUBMERGE plank in shallow pan of water for an hour. Prepare grill for direct and indirect medium heat.

STIR together salt, pepper, and paprika. Rub both sides of chop with mixture. Lay chop on plank. Top with 3 or so apple slices and sage leaves.

SET PLANK over direct heat. After 20 minutes, move to indirect side of the grill.

WHILE CHOP IS GRILLING, in a sauce pan, boil 12-ounces of cider over high heat until only 6 ounces remain. Stir in the apple cider vinegar and set aside.

BY THE TIME that reduction is done, the plank should be on the indirect part of the grill. Cook chop until it reaches 145°F. During the last 5 minutes, brush with cider reduction. Once done, remove from the grill and allow to rest for at least 5 minutes.

PLATE with additional apple slices (grilled, if you prefer) and top with remaining cider reduction.

How do you stop the plank from burning?

You soak it in water beforehand, so it can catch flame on the grill and smolder. It’s going to smoke. It shouldn’t burn, though, because typically you’re only cooking on it for 20–25 minutes.

Why use a plank at all?

The key to a good meal is adding layers of flavor. It’s why you marinate. The plank is just adding something else. It makes the dish that much more interesting.

Why not just use wood chips?

Plank smoke gets closer to the protein than charcoal or wood chips. It’s forgiving. The flames can’t reach the food. It’s kind of like cooking indirect, but it allows for better control. And it’s awesome when you serve it, because it’s like “Here’s dinner. On a piece of wood.”

What types of wood work for planks?

Cedar, maple, oak, alder. There’s all kinds. For seafood, I love cedar. If I’m doing beef, I love to use hickory. It’s got a mild subtle flavor with a little sweetness to it.

Most irritating thing you see amateur grillers do?

Overcooking their food. If it’s on the grill, chances are they’re going to cook it too long.