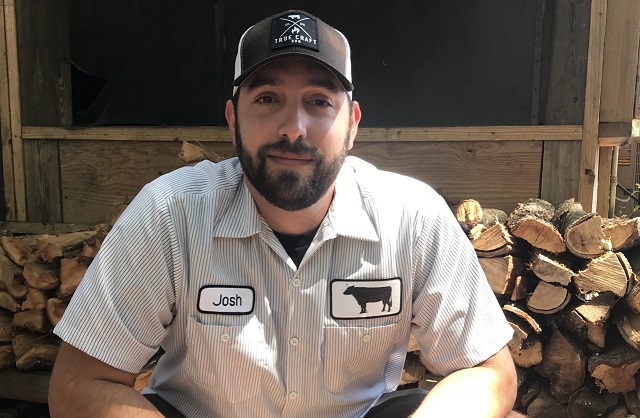 Josh Tahan is quite simply a grill-aholic. He grills almost daily for his family, teaches grilling classes on weekends, travels to Big Green EGGFests, and even totes his grill to work. Which has nothing to do with grilling. Though grilling is what got him his job at the brand and consumer research firm in Tampa, where they often help develop menus for chefs and restaurants. At lunch, he grills for his coworkers, if at all possible. Then he totes his grill home on the weekends for parties. But that’s just one of his grills.

I have nine grills, and that’s after I got rid of a few. I have four Big Green Eggs at home and pellet grills­—I have three of those—a pizza oven, and a grill that’s really got my attention, called a PK grill. That’s the one I take to work now. I only do it once or twice a week. I did an 8-pound turkey breast on Friday, and someone asked me, ‘How do you get this to be so juicy?’ I told them, ‘I just know how to cook it to 160 degrees.’ It’s not rocket science. It’s just about cooking it to the right temperature.

Do you cook everything to a specific temp?

I did classes that were all about pork chops, because I wanted to show people how to cook pork chops to 145 degrees. People don’t ever think about temp probing on cuts like that. If you ever had a pork chop you didn’t like, it’s typically because they cooked it too long. My mother did that. My mother would make terrible pork chops. But you have the ability to not make pork chops the way your mother did. Because they’re really a good cut of meat.

What about pork collar?

In competition barbecue, they know it as the money muscle, because it’s what wins competitions. It’s a muscle within the pork shoulder. It’s almost like the length of a small tenderloin but looks like stained glass when you cut into it, because it’s marbled incredibly with fat. It’s really the only cut of pork other than bacon that’s an equal amount of fat to meat, so it keeps it extremely moist—and such a different flavor. It’s the up-and-coming cut of meat. You grill it like a steak or pork chops—hot-temp sear it a couple of minutes per side. If you overcook it, it’s fine. It’ll still eat like the best pork you ever had.

It’s literally the cheeks of a cow. People are a little scared when you talk about something that comes from the cow’s head, but you smoke and braise it, and it turns into the best pulled beef for tacos. It’s almost like eating braised short ribs.

Is pork cheek worth eating too?

The best part of the hog is the cheek, when I do a whole hog. You make a fish hook with your finger and push it through the outside of the cooked hog where the cheek is and pull it out. It’s literally like a scallop that’s cut in half. Probably weighs an ounce, if that. That’s the best eating there is on the hog—it’s the chef‘s dinner.

If you’re eating bacon, you’re eating pork belly that’s been cured and smoked. When you buy pork belly in fine dining, it’s typically slow roasted or braised. There’s been this kind of trend of turning it into a riff on some favorite barbecue foods, like cooking them like their brisket burnt ends. Burnt ends aren’t literally burnt, but double cooked in a reducing liquid of sauce, so they get all nice and caramelized. Pork belly is done similarly, smoking it originally, then braising cubes in sauce. You’re enjoying rich and sweet and fatty pork more than the sauce.

Preheat grill to 400 degrees. Set up for direct cooking (grilling directly over the flames).

Remove cedar planks from the water and pat dry with a paper towel. Using tongs, transfer the planks to your grill and let them “cook” for 2 minutes. Flip and repeat. Remove from grill.

Line the shrimp up on the planks. Try to stand the shrimp up (a small slice down the back/semi-butterflied helps) as best you can. Carefully place the planks on the grill and cook for 6 minutes.

While your shrimp cooks, stir the butter and garlic together in small bowl. When the 6 minutes are up, baste the shrimp with the garlic butter. After another 6 minutes, remove the shrimp-filled planks from the grill and serve alongside the Key West Sauce.

Key West Sauce: Place all ingredients in a blender or food processor and puree until smooth. Refrigerate and serve cold. Sauce can be made up to four days in advance.

If you still want a smoky aspect without smoking, use smoked cheese. It gives you the outdoor taste when you don’t want to cook in the 98-degree weather.

Is there a trick to using a skillet on a grill?

Trying to cook live for a tailgate or crowds, then cook ahead. Like burnt ends you smoke ahead, then cook in the sauce when you get there. You save four hours, and they’re still going to taste great. Beef cheek, if you smoked them two hours Friday night, then an hour or so to get them finished on Saturday. That’s how I approach cooking in general—the more you prep ahead, the better. I prep the night before, that’s how I can cook like it’s Saturday every night of the week. Don’t shortchange yourself just because it’s a Tuesday.