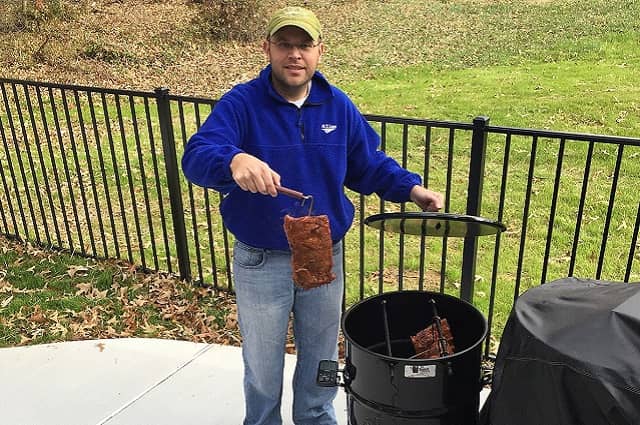 John Thomas, a lab researcher in Baltimore, Maryland, says his nerdiness follows him everywhere. Even into his love of grilling. “It’s the technical aspect of it,” he says. “Grilling is not just throwing a burger on some heat. It’s about fat content, flavorings, the kind of heat generated…there’s lots of variables to control, lots to tinker with.” He and his fellow avid Ravens fans tailgate every home game — “We don’t have a name. We’re just a group of friends”—where he mans the grill.

WHAT’S A TYPICAL TAILGATE LOOK LIKE? We don’t have 20 warmed-up side dishes. Our focus is on an over-the-top meal. We pay a lot of attention to the few items we have. It’s not burgers for us. It’s burgers stuffed with jalapenos and cheddar. We don’t do grandma’s cookout.

CHARCOAL OR GAS? If I had to pick one, charcoal. I like that control of the heat. If I want to have the coals arranged in an odd fashion because I got a wife who likes a well done steak, I can make her part of the grill much hotter. Then I can back off the heat in another area and move just a few coals over where I have French fries going. Gas is a lot easier, but I like that flexibility of charcoal.

MOST SURPRISING THING YOU EVER GRILLED OR SMOKED? I think I would say onion rings. I took onions and brushed them with Sriracha sauce [a hot chili pepper sauce], wrapped them in bacon, put pepper all over them, and put them on the smoker for an hour and a half. It was the most popular post I’ve ever done on my blog.

DIDN’T THE BACON JUST MAKE THE ONION RINGS SOGGY? You usually think deep-fried with onion rings, but if you bite into these, it’s crunchy, like when you bake bacon in the oven. A smoker is like an oven, so sitting on the grates wrapped around an onion, bacon’s going to get crispy. It really works well. Nothing floppy.

2 Form loose patties, because a tight burger will be tough and not juicy.

3 Put a slight indentation in the center of each patty with your thumb to help it keep its shape on the fire.

4 Toast your buns. Thirty seconds over direct heat is all you need.

5 Use over-the-top toppings. Think outside the box, like potato chips or fried eggs.

7 To test level of doneness, dig a little corner of the spatula into the patty and peek right in there.

8 There’s no universal cooking time for burgers. There’re too many variables, like meat temp when you start, patty thickness and grill temp.

9 Leave time to melt the cheese. It needs about a minute with the lid down. Toast your buns at the same time. Perfect timing.

WHAT’S THE TOOL MOST PEOPLE NEVER USE BUT SHOULD? It might be very simple, but probably a timer. I have a timer that goes around my neck. It’s a lanyard kind of thing. I look like a football coach. But time and temp are the key to grilling. Even if you see your kid inside putting a fork in a light socket, if the timer goes off, then you have to say, “Kids deal with that because I got steaks to grill.”

SO YOUR ADDICTION TO DETAIL MEANS YOU NEVER OVERCOOK THINGS? If that happens, it’s because I’m having beverages with friends by the grill, and I’m not ready to go back inside.

DO YOUR NERD SKILLS MAKE YOU A MAD SCIENTIST AT THE GRILL? The opposite. I don’t do anything crazy. I research things in such detail that I tend not to mess with stuff where I’ll fall flat on my face and fail.

WHAT’S THE MOST DIFFICULT THING YOU HAD TO LEARN? Controlling temperature. When somebody doesn’t understand grilling, they put the grill on high and put a steak on and burn the living hell out of it. But if you understand heat, then you know it only needs a couple of minutes and it’s done. That seems weird to people, but they don’t understand how hot that heat is.

To caramelize the onions, cook onion slices in the olive oil over medium heat in a frying pan for about 30 minutes until nicely caramelized. Stir often, so they don’t burn too much.

Grill burgers over medium heat, flipping every three minutes until almost done to your liking. Lay on a slice of cheese and 2 slices of bacon, so they warm as the cheese melts.

Remove from fire. On top of bacon, add caramelized onions and generously pour steak sauce over it all. Slip it all onto a soft, warm bun.

WHAT’S THE WEIRD THING YOU DO THAT YOU’RE NOT EVEN SURE WHY IT WORKS? Smoking ribs on a pit barrel cooker. It’s a typical barrel, but there’s no grate, just two pieces of rebar across the top, and you hook the ribs to the bars. I’m fascinated by it. For some reason it works. When I get into my science mind, I think what’s happening here is ribs are fatty. That fat melts and drips all down the ribs, so it’s kind of basting itself like a constantly refreshed mop solution. When you do ribs horizontally, that fat’s pooling or dropping right into the fire. With this thing, I had three-and-a-half hours with no work—no mopping, no basting, no tenting— and they’re phenomenal.

MOST IRRITATING THING YOU SEE AMATEUR GRILLERS DO? They don’t grill their buns. It really hits a nerve with me. The roll is part of the sandwich. It just makes sense. It’s got to be warm and toasty.

YOUR ADVICE TO TAILGATING GRILLERS? Don’t overlook the simple idea of a gourmet burger. I’ve made Big Mac burgers that were absolutely incredible with the special sauce and everything. Or, I did one topped with a runny fried egg, bacon and guacamole. Think outside the box. I’ve put peanut butter and bacon on burgers before. I don’t even bring condiments. I want all the flavor to come from my burger. Their instinct may be to put mustard and ketchup on every burger but absolutely not mine. There’s flavor in these suckers.