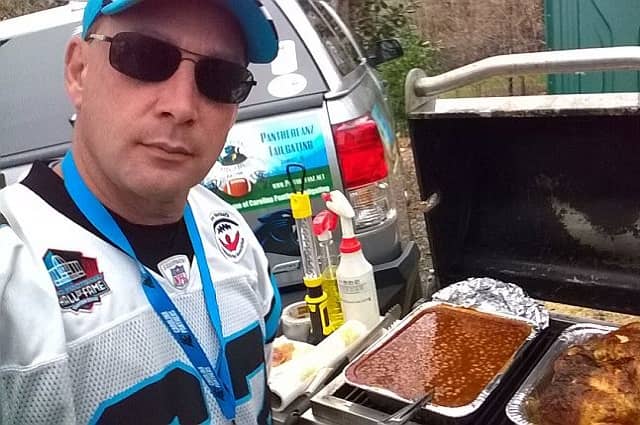 Most people think Dan Ortel is a mild-mannered technical strategist for Microsoft living quietly in the suburbs of Charlotte, North Carolina. But there’s more. Far more. Whenever the Carolina Panthers hit their home field, Ortel’s nerd demeanor drops and out comes DanO — the die-hard fan, DJ, and smoke master for a jumbo-size tailgating crew, the Pantherfanz.

Do you have a Panther fan persona? My other nickname’s Coach, because I walk around in full Panthers gear with a penalty flag and a whistle. If I see something getting out of hand or someone saying something, I throw the flag and give them the whistle. It makes them laugh. People around us will be saying, “Book ‘em, DanO!”

What’s your tailgate like? We started tailgating in 1995 when the Panthers came into existence. We had a bunch of small grills on the ground. Now we have about 70 to 80 people in our tailgate proper and a couple hundred generally show up. But if it’s a night game or playoffs, we’ve had 500 people. We’re at a point where we have our own lot outside the stadium.

You rent an entire lot? Holds 22 vehicles. What we do is lease the whole lot and have an off-duty police officer who sits in the lot during the game. That way, after the game, we can come back and eat all the leftovers. We like to use every part of the buffalo, no waste.

What do you smoke on? I have a 12-foot-long trailer smoker that I can feed a couple hundred people on. The smoker is a Brinkmann smoker, about four feet long. You can put eight pork shoulders in that at 8 pounds each. That’s 64 pounds of meat, so you can feed 150 to 170 people on that. It’s also got two 40,000 BTU burners, I call the turkey fryers. There’s a griddle we can put on that for breakfast or cheesesteaks.

Do you do all the cooking? I cook all the big stuff and send out an Evite and have them come up with filler items — potato salad, deviled eggs, coleslaw.

Do you have any food traditions in your crew? We do an oyster roast every year. We steam 1,000 oysters. You halve them, ladle on Creole butter, and sprinkle with parmesan cheese. That’s our chargrill oysters.

Do you have a tried-and-true brats recipe? With the brats and hotdogs, I’ll boil them in beer, onion, salt and pepper first, and then smoke them for about an hour with hickory. They come out fantastic. It tenderizes the meat and keeps it moist, and you get a little bit of the smoke flavor.

Is there a place for gas in your grilling? Gas is only meant to assist in lighting the fuel.

Biggest mistake you’ve made on the grill? Probably losing track of time. There was once, we were cooking New England clam chowder, and the burner was left on, and the chowder ended up looking more like chili. We had to send that pot to a technician to get it clean.

A pot technician? I have a friend, Dave, that has a pan restoration company. He uses a chemical process to remove the carbonation from metal pans. I was going to throw that clam chowder pan out, but he told me he could clean it, and it has a lot of meaning and history to me, so I said go ahead. He saved it.

Most irritating thing you see grillers do? Nothing irritates me more than to see someone cooking a burger or steak and they press down and squeeze the juice out of it. It’s a cardinal sin.

Favorite cut of meat? Brisket. It’s very unforgiving. But when done perfectly, it’s very rewarding. It’s a little bit science and a little bit art. You have to maintain a low and steady temperature and you can’t deviate from that. The brisket will stay at 140 for a few hours, and people think it’s not cooking, so they tend to turn the heat up, but that’s when the collagen starts breaking down. If you’re not steady when it hits that plane, you dry the meat out.

What’s your brisket secret? You got to trim it up nicely but leave the right amount of fat, then put a little bit of mustard paint with my homemade dry rub on it. Then I smoke it for about 14 hours, take it out and let it rest for about an hour. Then it slices like butter.

What’s the most difficult thing in grilling for tailgates? Probably knowing the quantity to cook for each tailgate when you can have 80 people one week and then 150 the next, and then back to 80, and 400 at the next one. I come from an Italian family, so you do not want to run out of food.

Your advice to tailgating grillers? Always have a plan B because the last thing you want is to be caught with your pants down. If you have to feed 100 people and you run out of propane or run out of the meat, all the energy leaves the tailgate. My plan B is to have three main menu items and have another grill. You have to be fault tolerant.

7 Tips for the Ultimate Brisket

2.  Trim with care. Leave quarter-inch of fat around brisket.

3.  You only need salt, pepper, paprika and garlic in the rub. Don’t overpower the meat. You want it to stand by itself.

4.  Massage dry rub into the meat, but be gentle.

5.  Keep the smoker temp at a constant 220 degrees, no matter how much the meat tries to fool you. Don’t deviate. Be patient.

6.  When done, don’t cut the meat right away. Let it rest for 30 to 60 minutes, so the juices accumulate back into the meat.

7.  Slice against the grain. It creates a more tender cut.