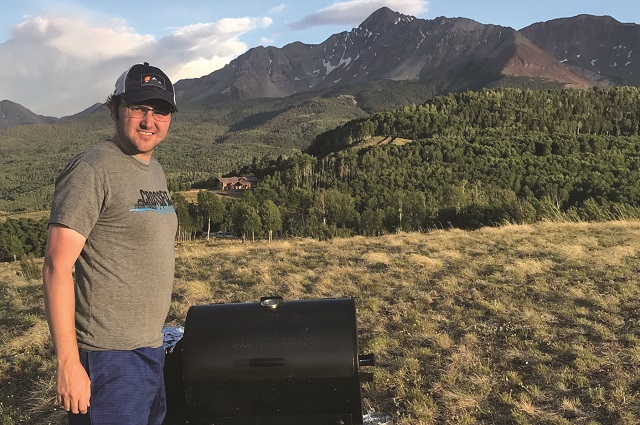 A teacher by day, a backyard chef by night, Adam McKenzie infuses the tough but fascinating concepts of science, technology, engineering and math into kids. All day. And not just any kids, but the youngest—from kindergarten through fifth grade—with the attention span of gnats. Maybe that’s why this Colorado-native gravitated to grilling and smoking every evening with its quiet, low-and-slow, long cooks. And yet he couldn’t stop teaching. To date, he’s posted 667 photos and very short how-to videos of his own cooks on Instagram, and grown an audience of 78,000 fellow grill-aholics.

So is it charcoal or gas for you?

I’m pellets. I still have my Big Green Egg and I have a barrel cooker, but my primary cookers are my Traegers. They’re pellet grills. For me, it’s the ease of use. When I get home from school, I’m tired. It’s nice to know I can start up the grill and don’t have the mess of charcoal, but I get that great wood smoke flavor. And I know I’ll get really great food.

Not really. They’re very small chunks of hardwood. You just load up the pellets in the hopper, set the temperature, and turn on the grill. And you know it’s going to hold that steady temperature. [The pellets are fed down the auger into the fire pot as needed to maintain the temp.] And Traeger uses convection cooking, so the air is circulating around inside the grill. It’s indirect cooking—not direct over the fire—but you’re getting the wood-flavored smoke circulating all around the food. And clean-up is just as simple as vacuuming out the fire pot.

If it’s never cooking over direct flame, doesn’t that limit your options?

The sear is going to be a little different. It will sear, but not the same as over the top of flame. But you can also use a cast-iron pan or Grill Grates, and once that heats up at high temp, you’re going to get that nice sear or grill marks. Not the same as a 900-degree fire, but it does the job well.

I think Grill Grates [anodized aluminum grate plates that sit on top of a grill’s own grates] work nice with pellet grills. They heat up really hot. You get a nice crust all the way across. You can flip them over and get the griddle action with the flat top. If you use it on a charcoal grill or gas or it will help prevent flare-ups too, because you’re kind of separated from the fire a little bit.

Reverse sear means a low-and-slow cook on the steak first and then a quick, seriously hot sear at the very end to create the crust and grill marks. The advantage is an even cook throughout the whole steak versus the outside being more done than the middle.

Got another favorite tool?

The Trompo King. It’s basically like a metal spike sticking up in the middle of a pan. A vertical rotisserie, but it doesn’t rotate. You can stake it with meat and do tacos el pastor or shawarma. You serve it by slicing away around the edges while it’s on the stake. It looks cool. It’s a different presentation. And you can cut off the crust and then put it back on the grill and let it crisp up again.

Is this primarily for big chunks of meat?

But you can’t maintain the patty that way, can you?

It’s not necessary for it to be a patty to be a cheeseburger. It was meant to be different. It was kind of cool to stack nine patties on that stake with a layer of cheese between each one. Then I sliced it off in pieces and piled it on to a bun. It was good! That was a fun cook.

You lay the meat right on the coals. I usually do it at the finish after my steak hits temperature —a reverse sear. You want all-natural charcoal. You don’t want any chemicals getting into the food.

5 tablespoons favorite rub (I like Holy Gospel from MeatChurch)

Cut the pork belly into 1-inch cubes. Season all sides of the cubes with the rub. Let sit for 10 to 15 minutes while the smoker heats.

Preheat the smoker to 275°F. Line the drip tray with foil to make for easier cleanup.

Place the cubes directly on the grates and cook until their internal temp reaches 190°F, 2 to 3 hours.

Move the cubes to a disposable aluminum tray large enough for them to spread out in one even layer.

Combine the barbecue sauce, hot sauce and bourbon, and pour over the cubes. Mix well. Sprinkle with the turbinado sugar and stir again. Distribute the cubes in an even layer. Top with pieces of butter.

Place the pan on the smoker and continue to cook at 275°F until the sauce is reduced and the cubes are tender. Serve with a toothpick, in a taco or on slider buns.

And you do what?

Let the coals get white hot, blow some of the ash off, then lay the meat on the coals. I try and spread the coals as flat as possible, so you have as much surface area touching the steak as possible. I turn the meat about every 20 seconds for about two minutes per side. Some people are really nervous at first when they do it, but it produces some really good results.

The heat’s going to be a lot hotter. It won’t necessarily burn the steak, but it will get a darker crust. I think it’s a lot better and something that’s unique. It’s not ashy tasting, but you’re definitely going to get a stronger wood taste. It’s hard to describe the taste.

What’s an overlooked cut of meat by people?

Tri tip. If you can find it. I think it’s a great cut, really versatile—tacos, sandwiches, or eat it like a regular steak. It’s a really flavorful cut that you don’t see a lot of. People tend to think of it as a California thing, but it should be bigger than that.