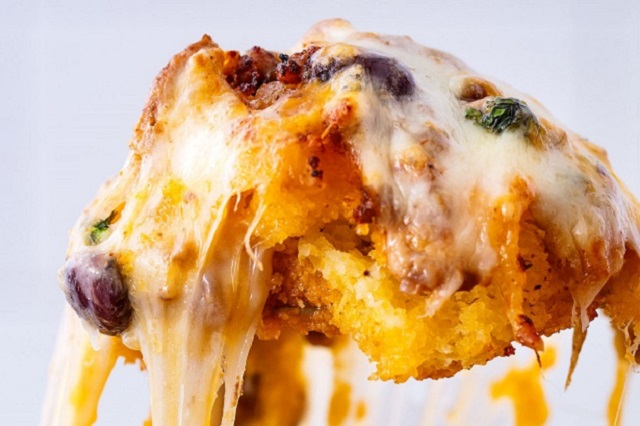 "If you’re making tamale pie with cornbread on top, you’re doing it wrong—it’s the perfect crust. After it bakes, poke holes all over and pour on the enchilada sauce. It seeps inside for an insane experience."

Preheat oven (or grill) to 400°F. Grease a large oven-safe skillet with cooking spray (use a cast-iron skillet, if baking this on the grill).

Meanwhile, in a large skillet over medium heat, heat the oil. Add the onion, cumin and chili powder. Season with salt and pepper. Cook until soft, 5 minutes. Add the garlic and cook until fragrant, 1 minute more. Add the ground beef and cook, breaking up meat with a wooden spoon, until no longer pink, about 6 minutes. Drain the fat.

Poke the entire surface of the cornbread with a fork and pour the enchilada sauce over it. Add beef and top with cheeses.

Cover with foil and bake until cheese is melty, about 20 minutes. Switch oven to broil, remove foil, and broil until cheese turns golden, about 5 minutes.