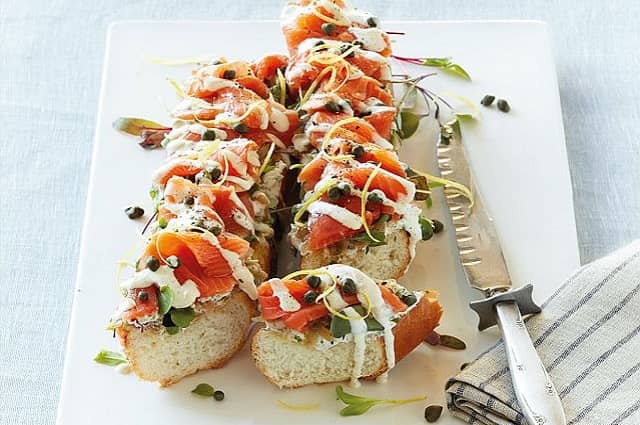 "This divine quick-to-make sharing plate can be assembled a few hours before the guests arrive and is easily doubled. Velvety smoked salmon and creamy vanilla sauce is an unexpected combination; the vanilla adds a surprise layer of fragrance and flavor to the stunning overall taste. Pair with a buttery chardonnay or a classic gin martini."

For the Vanilla Sauce (makes 1 cup):

For the Herb Cheese Spread:

For the Vanilla Caramelized Onions:

2 vanilla pods, split (or 2 teaspoons vanilla paste at the end)

For the Vanilla Sauce: In a medium bowl, whisk yolks with a pinch of sea salt, lemon juice, vanilla paste and honey until well blended. Tuck a twisted tea towel around base of bowl to hold it steady. While whisking egg mixture continuously, drizzle oil in a slow, steady stream until sauce begins to come together and thicken. If too thick, whisk in a teaspoon of water until well combined. Alternatively, use an immersion blender to emulsify the sauce. Cover and chill until ready to use.

For the Herb Cheese Spread: In a small bowl, combine the cheeses, fresh herbs, vanilla seed and pepper until smooth and creamy.

Assemble and Serve: Preheat oven to 350°F. Split the bread lengthways and brush both sides with olive oil. Toast in oven oiled-side-up until golden brown, about 7 minutes. Spread bread with herb cheese spread and arrange on a serving platter. Top with the chopped caramelized onions and smoked salmon. Drizzle with vanilla sauce. Sprinkle with capers, lemon zest and additional fresh herbs or microgreens. Use a sharp serrated knife to cut into slices.