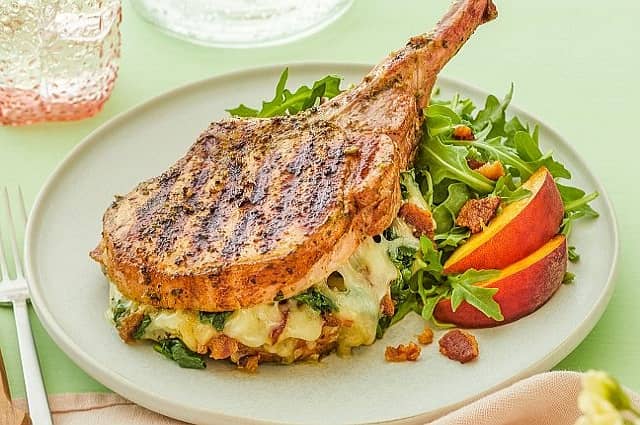 "The sweet, buttery flavor of Havarti lingers alongside the succulence of a grilled chop and the salty goodness of bacon."

Fry the bacon in a large skillet over medium heat until crisp. Remove the bacon with a slotted spoon to paper towels to drain, reserving 1 tablespoon drippings.

Sauté the spinach in the bacon drippings in the same skillet over medium heat for 2–3 minutes or until wilted. Lightly season with salt and pepper. Remove from the heat. Cool completely. Stir in the Havarti and bacon.

Cut a pocket in each pork chop with a sharp knife horizontally to within a ¼-inch of the bone. Season with salt and pepper. Stuff each pocket with a fourth of the spinach mixture and secure with toothpicks.

Grill the pork chops with the lid closed over medium-high heat for 8 minutes. Brush with pesto. Flip the pork chops, brushing with pesto. Close the lid and grill another 7–8 minutes or until a thermometer inserted in the meat reads 145°F.

Transfer the pork chops to a serving platter. Cover and let stand for 5 minutes. Remove the toothpicks before serving.