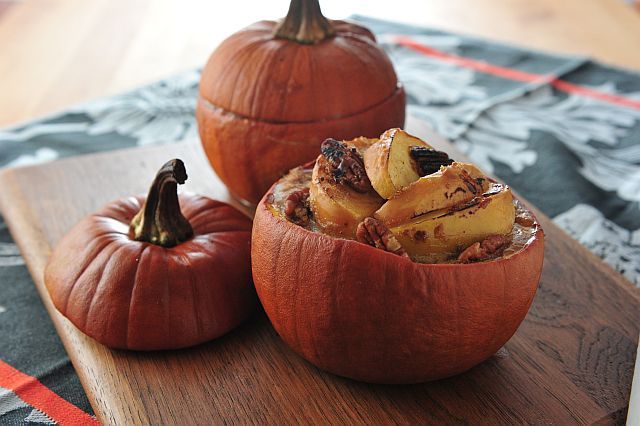 "Sugar pumpkins, also known as pie pumpkins, only weigh up to a few pounds and are sweeter with a firmer, less stringy flesh than carving pumpkins. This recipe is even better cooked with a little apple wood smoke."

Beat the eggs in a large bowl. Beat in the cream. Whisk in the vanilla, brown sugar, nutmeg, cloves and salt. Add the flour and combine until smooth.

Cut the top third or so off each pumpkin. Angle the knife while cutting, so the slanted cut tapers toward the middle to allow the tops to securely center on the pumpkin. Hollow out the pumpkins, removing all the seeds and pulp.

Layer the apples and pecans inside the pumpkins, and then drizzle the egg mixture equally into each pie. The apples can extend above the rim, but the egg mixture should not fill the shell more than 2/3 high.

Place the tops on the pies and transfer them to the indirect cooking zone. Roast with the hood closed for 20 minutes. Remove the tops and set them directly on the grill grate in the coolest part of the indirect zone. Close the lid.

Note: 6 pumpkins require a sizable indirect cooking zone. A K900 can handle them, but some grills are not large enough.