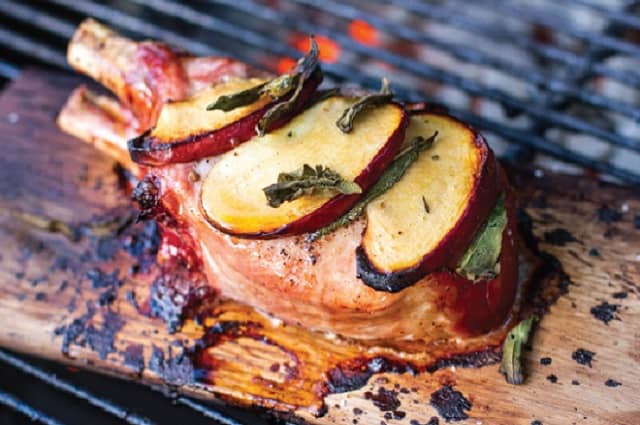 "The key to a good meal is adding layers of flavor. It’s why you marinate. The plank is just adding something else. It makes the dish that much more interesting."

1 double-bone pork chop (this works with any pork chop, but the double bone looks awesome)

1 wood plank (I used red oak but anything will work)

SUBMERGE plank in shallow pan of water for an hour. Prepare grill for direct and indirect medium heat.

STIR together salt, pepper, and paprika. Rub both sides of chop with mixture. Lay chop on plank. Top with 3 or so apple slices and sage leaves.

SET PLANK over direct heat. After 20 minutes, move to indirect side of the grill.

WHILE CHOP IS GRILLING, in a sauce pan, boil 12-ounces of cider over high heat until only 6 ounces remain. Stir in the apple cider vinegar and set aside.

BY THE TIME that reduction is done, the plank should be on the indirect part of the grill. Cook chop until it reaches 145°F. During the last 5 minutes, brush with cider reduction. Once done, remove from the grill and allow to rest for at least 5 minutes.

PLATE with additional apple slices (grilled, if you prefer) and top with remaining cider reduction.