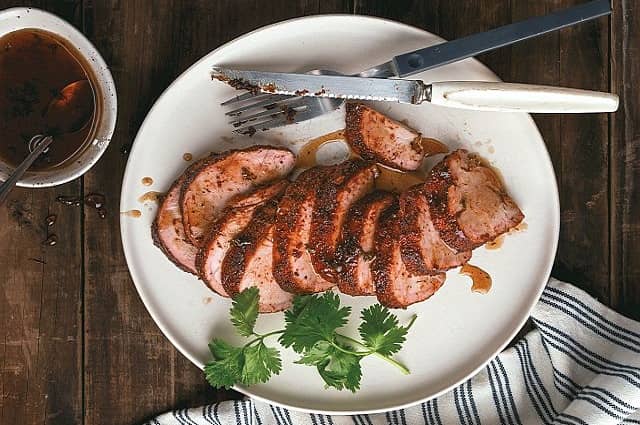 "Mantles of spice and heat from four sources meet the smooth sweetness of real maple syrup (don’t ruin it with the chemically fake version)."

Set up the WSM for 400°F and remove the water pan. One fully lit chimney should do the trick for this recipe.

For the Maple-Chipotle Glaze, in a small bowl, mix together the maple syrup, brown sugar, chipotle peppers with sauce, mustard, and chili powder. Cover and keep it in the fridge until you’re ready to use it.

Using the butcher’s string, tie the pork tenderloin so it looks uniform in thickness from one end to the other. Be sure the ends are tucked in and are the same thickness as the center of the tenderloin.

Coat the outside of the tenderloin with the olive oil and season with salt and pepper.

Flip the tenderloin over, brush on some of the glaze, just to coat, and cook for 5 minutes. The finished internal temperature should be 140°–145°F. Remove the tenderloin from the heat. Loosely tent it with foil and let it rest for 15 minutes.

While the tenderloin rests, in a small saucepan over medium heat, simmer the remaining glaze for 10 minutes.

Slice the tenderloin into 1⁄2-inch pieces, and serve it with the Maple-Chipotle Glaze.