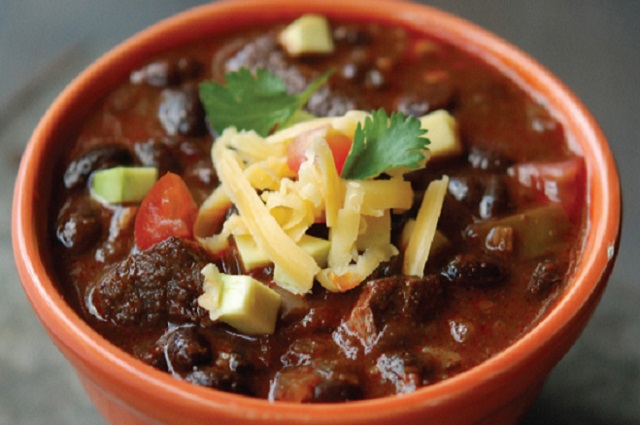 In a large enameled, cast-iron casserole, heat the oil until shimmering. Add the bacon and cook over moderate heat until the fat has rendered. Using a slotted spoon, transfer the bacon to a plate.

Season the pork with salt and pepper. Add the pork to the casserole and cook over moderately high heat, stirring occasionally, until browned, about 7 minutes. Add the poblanos, onion, chipotles and garlic to the casserole and cook over moderate heat, stirring occasionally, until the onion has softened, about 7 minutes. Add the chile powder, cumin, oregano and minced cilantro and cook until fragrant, about 1 minute. Add the tomatoes, beans, chicken stock, beer and cooked bacon and bring to a boil.

In a small bowl, whisk the corn flour with the water until smooth. Slowly whisk the mixture into the chili until incorporated. Season the chili with salt and pepper, garnish with cilantro and serve.

Make ahead: the chili can be refrigerated for up to 3 days.