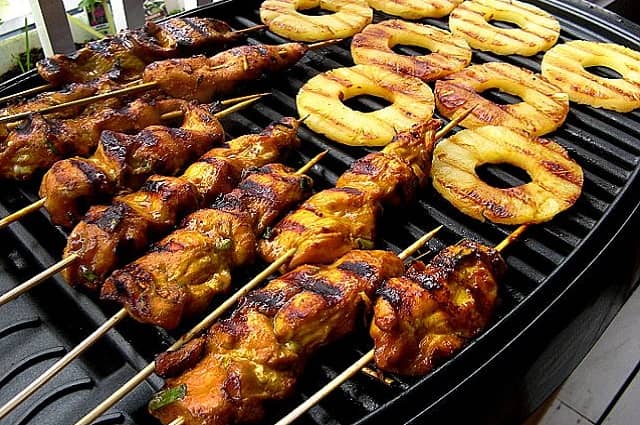 Thai food boasts fresh, bold flavors and has become one of the most sought after type of dishes in the country. To the simple palate, Thai food can be considered an exotic version of Chinese food; sure, there are similar elements, but Thai also balances spicy, sweet, tangy and savory in a way that is incomparable. Grilling is typically the choice for making marinated meats or vegetables that feature a smoky taste and aroma. While grilling Thai food might seem like a monumental task, given the complexities of the cuisine, here are a few recipe tips to help you make the most of it!

Before we even get to chopping meats and setting your grill temperatures, let’s get the most important things out of the way first: barbecue sauce. This will either be what you slather on to your beef before laying it on the grill or what you dip your chicken wings into, so it is a must-have for Thai grilling. Also called sweet chili sauce, the tangy-sweet mixture adds the ultimate boost to your food. It is made with typical Thai ingredients such as oyster sauce and dried Thai red chili, which can be found at the local Asian market. (And if you like to kick up the heat, add in more of the red chili pepper.)

Arguably one of the most popular Thai dishes you’ll find on a restaurant menu, the traditional skewered stick-meat is commonly grilled and served with peanut sauce and cucumber salad. Making for a great appetizer that’s easy to serve (and consume, given the fact that you don’t need utensils). Marinate strips of chicken in a mixture of minced garlic, chiles, soy sauce, fish sauce and a couple pinches of brown sugar. Grill some pineapple rings too if you desire. Remember to set some of the marinade aside to brush the meat as it cooks. Grill time should take no longer than 20 minutes but check it at the 12-minute mark just in case.

The idea of a barbeque doesn’t often lend itself to thoughts of a salad but getting your greens in this way makes it much easier to accomplish! Beef Waterfall is a standard Thai salad, made with thinly sliced grilled steak that has bathed in a savory marinade over a bed of mixed lettuce and fresh herbs. Oyster sauce, soy sauce, lime juice and a bit of brown sugar will constitute the marinade. Let the cut of beef soak up all that goodness for several hours. Grill over medium-high, then cut into very thin slices. Place the beef in with the salad and adjust herbs (like mint leaves, or bean sprouts) to your liking.

If you’re more of a seafood fan, Thai grilled shrimp is the way to go! The marinade for this Tom Yum paste, which delivers a spicy, sour, and slightly sweet flavor. Toss lemongrass, ginger, crushed chiles, shrimp paste, fish sauce and a squeeze of lime into a food processer and blend. Cover the shrimp in the Tom Yum paste for about 10 minutes. (Try not to exceed that, because the lime may cause the shrimp to leak out its natural juices.)  Grill over medium until the shrimp lose their opaque coloring and turn a fleshy pink. Don’t forget to baste the shrimp as you rotate them.

Assuming your boating trip with the boys went swimmingly and you returned home with a nice catch of trout, snapper, or bass, you’ll want to try this delicious recipe immediately. (By the way, we’re grilling the whole fish, so nothing is going to waste on this bad boy!) Just about any white fish will do here, so after it’s cleaned and patted dry, make three diagonal cuts several inches apart along the side of the fish. Drizzle with lime juice and sprinkle sea salt. Put coriander, chili, fish sauce, water, tamarind and garlic into a chopper, then pour into a pan and add diced pepper, simmering on low for about six minutes. Grill the fish as normal and plate. Pour over the delectable sauce, ensuring it gets into the wedges of the fish.