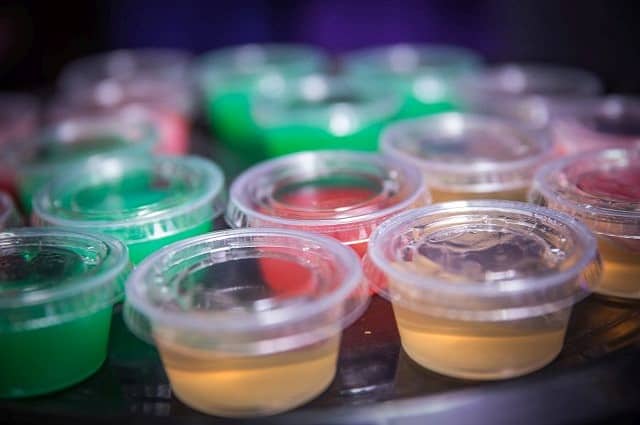 Sure, you’re home instead of the stadium parking lot, thanks to Covid-19, but, hey, you can still throwdown a wild gridiron celebration. And nothing says it’s a tailgate like alcohol-laced Jell-O shots spruced out in team colors.

First off, you can use most any alcohol. Vodka is the go-to. Great taste, plenty of pow (generally 80 proof), and doesn’t mess with the color. Don’t go cheap on the vodka, though. The shot may not take long to down, but that fake fruit and rubbing alcohol taste of bad vodka lingers.

The generic recipe for jello shots calls for boiling a cup of water and dissolving in a 6-ounce box of Jell-O. Sprinkle an envelope of Knox gelatin on top and let it sit for a full minute before whisking that until it dissolves too. Add a cup of cold vodka (or whatever). Then color tweak by adding food coloring or mixing Jell-O flavors.

Since every team has at least two official colors, you’ll need to layer your colored gelatin for the full team-spirit effect or you can just make single-layer shots in each of the team colors and set the shots out in a design for impact.

For layering, make the first color and fill the shot glasses or plastic condiment containers (with lids!) half full. (You can get 100 2-ounce, plastic jello shot cups for less than $8 at Amazon.) Let the first layer set in the fridge for about 30 minutes until firm—depending on how thick your layer is—before topping them off with the next color of room-temperature, liquid gelatin. Set the shots for the first layer at a slant (muffin tins work well for this) if you want a little wow.

To match the colors for each team, it can get really technical if you’re being persnickety. In which case, head to delish.com for detailed recipes on every NFL team. Or go more chill-ax with the whole thing and buy Jell-O flavors in the basic color you need—red, green, blue, yellow, orange, purple. Get bing cherry Jell-O for the really dark reds and cherry for the brighter hues. To deepen most any color, add a few drops of food coloring in the same hue. Or add food coloring to Knox plain gelatin mix (it’s colorless) to be more precise or for more tricky colors. There are definitely some NFL colors that need tweaking and here’s a few hints.

For white: Take the easy way out and top the shot with whipped cream. Or to make white gelatin, use a cup of sweet condensed milk mixed with 2 envelopes of Knox plain gelatin. Let the gelatin sit for a minute on top of the milk, then whisk until it’s combined. Maybe add a bit of vanilla too, since plain gelatin has no flavor either. Now turn on the medium heat and bring to a light simmer. Add 1 cup cold vodka and let it cool to room temp before pouring into the shot glasses.

For gold (like Chargers and Steelers): To one 6-ounce box of yellow Jell-O and one envelope of Knox plain gelatin, add one—and just one—drop of red food coloring. Deepens the yellow without changing it to orange.

For black (like Bengals and Eagles): Add a few drops of black food coloring to a 6-ounce box of grape Jell-O, lime Jell-O, and an envelope of plain gelatin

For brown (Cleveland Browns): Substitute one cup of hot coffee for the hot water with 2 envelopes of plain gelatin. Add ¼ cup sugar or it’s a very bitter shot.

For old gold (Saints) or tan (49ers): Make white jello (see above) and after adding the vodka, whisk in less than a drop (drip the coloring down a toothpick into the mixture to better control the amount) of brown and yellow food colorings. Whisk it and keep adding until you get that tan or more for that very subtle creamy gold.

For silver (Raiders): Basically, this is grey. So make white jello (see further up) and after adding the vodka, whisk in less than a drop of black food coloring. Whisk it and keep adding itsy amounts until you get the very light, silvery gray.