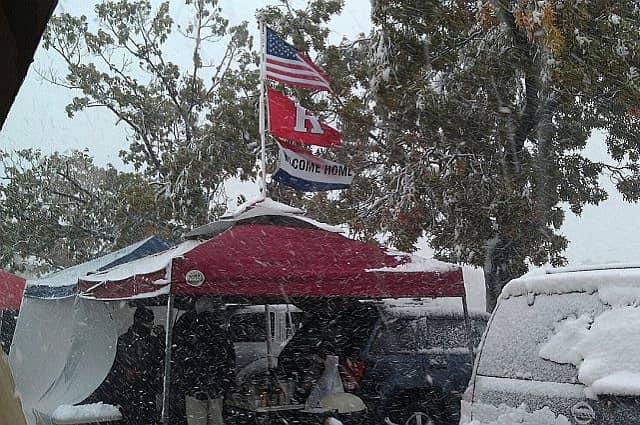 For many football fans, tailgating is all about grilling up great food and having a few “cold ones” while hanging out with friends before the big game. Burgers, brats, team jerseys, and an ice chest of beers are the basics for most games as the season gets underway in late summer and early fall. Once the winter storms start rolling in, for most of the country tailgating takes on a whole new level of commitment.

Even though some cold weather games are now played in climate-controlled domes, it’s still freezing outside in the parking lot and some of the coldest NFL stadiums like Lambeau Field, Gillette Stadium,  Soldier Field, and the Meadowlands are still open to the elements, so fans have to plan ahead to make the most of game day while tailgating in cold weather.

When it comes to any cold weather activity, clothing is clearly the most important consideration to stay warm and avoid hypothermia. Any ski magazine or sporting goods authority will mention layering for warmth. The first layer needs to retain heat and avoid dampness. Proper clothing that wicks moisture away from the body is a good thing.

The next layer should be something warm and comfortable that will provide insulation to trap warm air and retain heat. Fleece, down, and wool are all good insulators. The last layer needs to protect from wind and water. Wet clothing loses 90% of its insulating value so staying dry is key to staying warm.

Thermal socks also make a huge difference. Make sure to wear a hat so you don not lose heat out of the top of your head. At about 23 degrees the risk of frostbite increases substantially, so face protection is a must. Leave no skin exposed to extreme cold. Disposable hand warmers like HotHands are great for gloves and boots.

In really cold temperatures wood or charcoal may have to be used instead of a gas grill. Vapor pressure in a propane tank drops with temperature and at 30 degrees is reduced by almost half of what it is on a 60-degree day. At zero degrees that drops to about ¼ of the tank’s typical pressure. Insulating the tank or warming it up can raise the pressure enough to cook on. Of course, when the weather is that cold chili is always a crowd pleaser and a slow cooker connected to a generator could be the perfect option.

Green Bay Packer’s fan Jim Gorman recommends making the call on gas or charcoal early on because it’s tough to switch once you’re at the game. “If the salt doesn’t melt the ice on the roads, you probably want to go charcoal for grilling. If you get up and the roads are slushy gas will probably work.” He also recommends using plastic gloves while cooking to keep your hands dry and foam cozies to keep beers from freezing for a few minutes longer. For serious tailgaters, beers freezing is usually not a problem. Light beers freeze at about 28 degrees due to their relatively low alcohol content. Stronger, darker beers tend to freeze at a lower temperature.

Irish Coffees, Hot Buttered Rum, or Hot Chocolate with a bit of schnapps are also crowd pleasers. Just keep in mind that alcohol lowers core body temperature even as it makes you feel warmer, and dehydration is always a risk in extreme cold.

Having plenty of warm food on hand makes for a great cold weather tailgate. Chili, stews, soups, and brats in beer are all great cold weather menu items. Large hunks of meat which might take longer to cook will stay hot longer than smaller cuts of meat.

Finally, there’s the gear. With tailgating becoming ever more popular as a “sport” of its own, manufacturers are finding more ways for tailgaters to stay comfortable in the frozen tundra. Portable heaters are available in both gas and electric and can be radiant or forced air and infrared is very common.

Pop-up tents with side and back walls shield partygoers from the wind, rain, and snow. Some folks even bring heated seats. Of course, there are also low-tech solutions to beating the cold. A piece of two by four under a chair makes a great footrest to keep your feet insulated from the frozen asphalt. Nothing beats cozying up next to a fire pit under a blanket either.

As long as die-hard tailgaters plan ahead for tailgating in cold weather, there’s no need for the elements to interfere with game day. See you in the parking lot!