Tailgater on the Road – Cam Barfield’s Tales of Tailgating 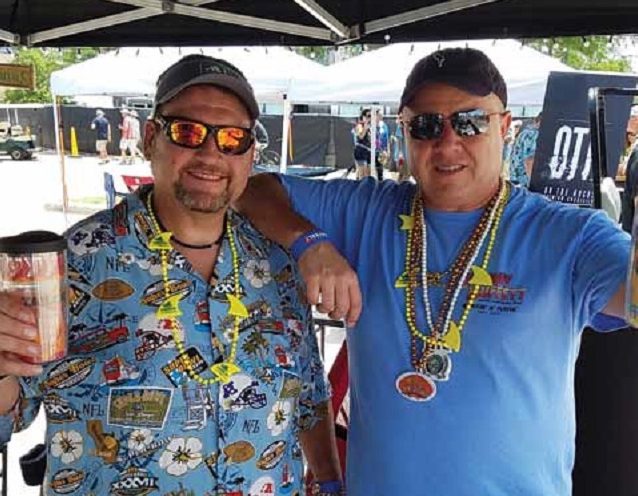 Tailgater has witnessed and survived some wild tailgating over its years of travels. Starting in 2014, we solidified our tour by sending out Cam Barfield to showcase products, spread the tale of Tailgater, and share the bounty of his masterful skills with both grill and smoker. And he returns each time with tales. It’s time to share. Here’s just a smattering of the travails and adventures from Cam’s recent years as Tailgater’s Parking Lot Pro.

In early April 2014, thousands of NASCAR die-hards poured into Ft. Worth, filling the Texas Motor Speedway for a weekend of hardcore racing. The annual Sprint Cup Series was at-hand, including the first Duck Commander 500. The members of the winning team were to be awarded unique Victory Lane duck calls from the famous “Duck Dynasty” stars, along with the traditional Texas Motor Speedway six-shooters and cowboy hats.

Like at most NASCAR races, fans in Texas were turning the track’s 6,400 campsites into a mini-city of tents and RVs. Among the throng, Cam and Tailgater’s publisher, Randy Dye, had set up for the four-day tailgate. “Coleman had sent us tents, lanterns and coolers,” Cam says. “We were decked out.”

The big race was set for Saturday, but Texas weather — always up for a change — threw a tantrum. And campers packed up. But not Tailgater’s crew. “We were out in the middle of nowhere, with not one tent around us, not one canopy. Just some RVs,” recalls Cam. “But we never left. We stayed the whole time inside the campground.”

For several days, the rain pounded, the wind blew up to a reportedly 50 miles an hour, and the Tailgater guys stayed put. “If it blew down, we duct-taped it up,” laughs Cam. “That was the craziest tailgating I’ve been into.”

By the end, all the non-RV campers had abandoned the lot. “We were the only idiots out there in tents,” our Parking Lot Pro says. “That’s what you have to deal with when you’re a tailgater. You deal with your elements and make it work — snowing, raining, wind blowing — doesn’t matter.”

The fierceness of the weather even won out over the main race, delaying it until Monday. “We still stayed til it was pretty much over. It was pouring down rain as we left,” says Cam. They’d lost two tents and two canopies to the winds. Ending as a twisted mess of metal poles and nylon, the ravaged gear was handed over to the track’s passing garbage truck on the last day.

“Wind is as annoying as rain when you’re tailgating,” Cam says. To cook, they’d designated one of the big tents as a food tent for grilling hamburgers and such. “One time, it had quit raining, so I stepped outside to eat, and my chips disappeared. The wind blew ‘em off my plate.” He sighs. “If it wasn’t nailed down, it was gone.” If it wasn’t raining, he says, it was blowing. “It was an unreal experience.”

The tenacious tailgaters hadn’t realized the severity of the weather until they got home and heard the details of the storm on the news. “We’d been through a pretty big dang ordeal,” Cam says. But they should have had an inkling when they waved goodbye to the remaining RVers and staff at the campground. “When we left, they were applauding.”

Cam says it just goes to show that tailgating NASCAR in Texas is the best. “When you camp out at their race campground, everyone gathers,” he says, with generally 300 to 400 people milling around. “It’s like a big block party.”

He’s tailgated at races in his hometown of Atlanta, but it didn’t hold a candle to Texas. “Atlanta has a noise ordinance,” he says, shaking his head. “At Texas, it’s a full-blown Oklahoma-Texas party out there. I’ve never seen anything like it. Nobody’s fighting, everybody’s drinking and listening to music. It’s a real atmosphere with a lot going on.”

Though raceways also offer a slew of tailgating spots in the center of the track, those tend to sell out before the season starts. But Cam says, don’t fret if you miss out. Because the best tailgating, in his experience, goes on in the campgrounds surrounding the track. “You couldn’t give me tickets to the infield.”

All “Hail” the Tailgaters

This January, Tailgater hit the Georgia Dome in Atlanta for its final send-off with the Falcons. The grand old stadium is due for demolition this summer. It was the NFC Championships against the Packers.

But despite being in the gentle South, Cam and Randy once again tailgated amidst Mother Nature’s wrath. “We set up in the morning and cooked,” recalls Cam. “The game didn’t start til late afternoon, so me and Randy and our buddies sat out in the Yellow Parking Lot in our rented spot.”

This time, they were living it large with one of Tailgater’s campers that includes its own bathroom, a generator, TV, and a stereo. Joined by about 15 of their friends, they had additional canopies and a couple grills set up.

Then it started raining. “It was cold,” says Cam, a native Georgian. “We weren’t sure how long we were going to make it out there, but we stayed the whole time.” They’d arrived at seven that morning — “so we could get our spot close as we could to the stadium.” They’d wrangled a space right across the street.

By noon, the seeping cold had turned to bouts of sleet. “Then it starts snowing and then raining again,” Cam says. “We just kept going. We pulled the TV inside and didn’t let the weather affect us.”

Their warmth, he says, was all liquid. Bloody Mary’s — “I call them ‘antifreeze’ ” — started at 8:00. By eleven, they’d switched to beer, and as the wet cold settled in deeper, they’d moved on to bourbon by 1:00 p.m. “As the day got on, it escalated into a little more fun,” Cam laughs.

Tailgating next to them, a German couple had brought homemade German wine. “So we were sharing, and that just added to the warmth,” says Cam.

When the game started at 3:05 p.m. and everyone else headed into the Dome, Tailgater’s intrepid Parking Lot Pro and our publisher stayed in the lot. “Why go in? We had all our TV, food and liquor right there,” Cam says. “We don’t even buy tickets because, to me, the fun’s out in the parking lot.”

It’s not just sporting events that draw Tailgater around the nation. We love a good outdoor party, period. So every November, thanks to Cam’s finesse with a smoker, we head down to the Oyster Cook-Off and Craft Beer Weekend. Spread along the sunny beach of Gulf Shores, Alabama, 45,000 people stroll through dozens of food booths, mostly hosted by restaurants and top-end chefs. 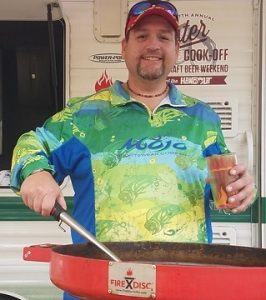 “This is a real fun tailgate,” Cam says. Tailgater sets up in the parking lot not even 20 feet from the Hangout restaurant, which originated the festival.

“We get into the Bloody Mary mix contest every year, and get into the oyster contest,” he says. Out of 100 teams, Tailgater came in an impressive 35th among a bevy of professional chefs and high-end restaurants. “They take it very seriously,” explains Cam, and adds with a smile, “We don’t.”

This year, Cam devised an artichoke spinach dip concoction for the oysters Rockefeller portion of the competition. For the barbecued oysters section, “I’d smoked real rich rib sauce and smoked a Boston butt while we were out there, so I made sure I put a little of that in there,” he says. “Because the Kansas Barbecue Society are the judges.

“We saw some extravagant stuff out there. Some barbecue guys come out hauling big smokers,” continues Cam, with a hint of wistfulness. He owns about 25 smokers, grills, fryers and broilers of his own. “But we’re tailgaters. We bring a trailer with big TVs on it.”

In travels for Tailgater, Cam’s seen many rigs. His favorite was the conversion of a Snap-On truck by a Texans fan. “Out of all the pro team tailgates I’ve been to, I thought the Texans were the best,” he recalls. “When they let the gates up, it was like a race into the tailgating area. And so many had made some sort of contraption out of their vehicle. They really got into their tailgating.”

Rigs in the lot ranged from half-million dollar tricked out RVs to thousand-dollar set-ups on vans. “I saw a Mercedes Sprinter decked out to the hilt with TVs, built-in grills, and a satellite dish. It was all actuated so with a push of a button, it would fold up and go,” he says. “The TV on the back was 60 inches.”

The Snap-On truck stuck out because of the loads of history and Texans memorabilia covering all the surfaces. “You could see these people had been doing this for years,” he says. Every surface resonated with the Texans logo or colors — “carpets, banners, towels, anything that had ever said ‘Texans’ on it, they had it.”

But it was all the photos of their friends hanging inside, alongside Texans images and autographs — “they had a signed hand towel” — that made the rig stand out. “You could look at all that and see how much fun they’d had over the years,” explains Cam. “It was pretty much a rolling billboard for tailgating. It took years to build it, but to have all their memories with them was pretty cool.”

For the over-the-top, luxury tailgating rigs, Cam says head to NASCAR lots. “They have the best. We’re talking $1- to $2-million busses,” he says. The surfaces, the screens, the sounds, the lounging…every bit is deluxe, nothing is forgotten, and some come with movie theaters and hot tubs.

Not surprisingly, it was a tailgate before a Jimmy Buffet concert that finally threw Tailgater’s Parking Lot Pro for a loop. Parrotheads, as Buffet fans dub themselves, throw out all inhibition and draw on endless wild, island-induced themes to decorate their tailgates and themselves. From coconut bras, kiddie pools, and enough blenders to make any small appliance salesmen swoon in joy, Buffet tailgaters do it all-in.

In Atlanta one year, Cam witnessed it firsthand. “It shocked me,” he says. The most impressive sight was three massive dump trucks rolling in and disgorging a small mountain of sand on the asphalt. “Right in front of these people’s RV,” he says, his voice still lifting in astonishment. “They built their own private beach. And it was a big beach. Then they jammed some umbrellas in it and set up some lounge chairs. It was just like you were at the beach, but in a parking lot. In a city.” 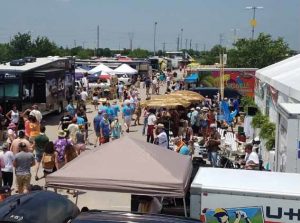 For our Parking Lot Pro, tailgating is all about relationships. “The first thing we do, is we feed the people,” Cam says. When you get to a lot, don’t just introduce yourself to your neighbors. “Take care of the security guys and the EMTs, and make sure they know you.”

He strikes up a short conversation to tell them who he’s there with, what’s going on at his tailgate, “and tell them you know they’re working hard and having to put up with all of us,” he says. “And we always take food to them, to break the ice. We tell them we’re down here and cooking, so if you need anything, just ask.” He includes the guy at the gate, as well. “That way when you need somebody let in, he’ll be more likely to help you out.”

Cam says there are three rules to tailgating. Number 1 is always have fun. Number 2 is to respect the people around you. “And number 3 is to never, ever go to jail. That’s going to cancel everything else out,” he says. Did he learn that last one the hard way? “Nope, I’ve never been to jail,” he chuckles. “But I do have fun.”

To keep up with where Cam Barfield’s travels as Tailgater’s Parking Lot Pro, follow us on Facebook or Twitter. He posts batches of succulent food shots and tailgate scenes.