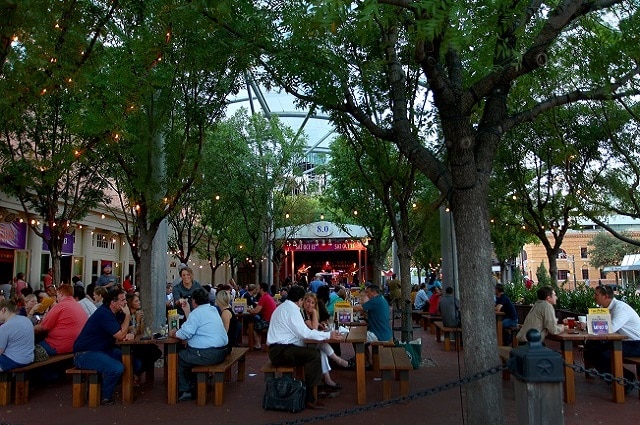 Dallas-Ft. Worth hosts a stable-full of award-winning, unique and out-of-the-box craft beer.

Fort Worth, Texas, may bring up visions of cowboy hats, stock shows and gun racks in pickups. And you’d be right. But what you’re missing is a fine assortment of craft beers and some trendy places from which to enjoy a slew of them at once. One of those places is the pedestrian-friendly downtown district of Sundance Square.

First off, if you’re a fan of—or need to buy gifts for—Texas Rangers or Dallas Cowboys fans, then before you start imbibing the delectable brews of the Lone Star state, you’ll want to stop at these team-sanctioned shops. Located side-by-side, the Texas Rangers Team Shop and the Dallas Cowboys Pro Shop attract legions of fans with all the usual array of fan gear. Besides being able to deck out your man cave and closet, the gold to be found here is scoring Rangers baseball tickets right in the shop. The only location you can buy them in-person, besides the stadium.

Next, walk past the Sundance Square Plaza—unless they’re hosting a local brew event at an open-air bar—and keep walking until you hit the Flying Saucer Draught Emporium, named as the city’s best beer selection in 2018 by readers of Fort Worth Magazine. Plan to stay awhile, because the aptly named emporium features nearly 80 beers on tap and more than 100 in bottles and cans.

According to Keith Schlabs, one of the founders, about 20 percent of those are local. “We do our best to seek out those that brew excellent beer. We have plenty of breweries to choose from in Texas.” That’s the advantage of sitting down in a taproom like this—you gain expansive access to the local craft beers without moving off your stool.

Some of the most popular drafts, Schlabs says, come right from Dallas-Fort Worth (DFW), like Martin House Brewing Company, who touts that their beers “will not be stymied by existing categorical guidelines. Rather, our beers find a place to truly shine and be unique outside-of and in-between those traditional categories.” That includes The Salty Lady, which they say is their interpretation of a Gose—a rather obscure, tart, salty German-style beer. “Its flavor is reminiscent of a sports drink at the end of a 110 degree day,” they say on their website (martinhousebrewing.com). You’re smacking your lips already, aren’t you?

Also at the top of beer requests at the expansive taproom is Peticolas Brewing Company, headquartered in Dallas. The founder Michael Peticolas got his taste for the craft from his mom who brewed a Mexican-style beer at home. Opened in 2011, Peticolas beer—“don’t call it cola”—has won multiple gold medals at the Great American Beer Festival, including in the aged beer category for their Great Scot! Scottish Ale. They describe it as having plenty of Belgian dark candi sugar fermented with a Trappist ale yeast. That produces the “unmistakably distinct character of a Belgian strong ale.” Notes of banana, plum and raisin linger in the background so it finishes with a gentle sweetness. “A noticeable warm feeling in your throat indicates the beer should be respected,” says their website (peticolasbrewing.com).

They also concoct a few unusual creations, like the GrIN & TONIC, an experimental cocktail beer that mimics the flavor of a gin and tonic. Brewed with copious amounts of juniper and coriander, the beer is then blended with tonic water and lime for a melodic balance of beer with citrusy cocktail. And at only 4% ABV, you can indulge in the tangy, refreshing flavor a few more times.

Another local brewer, Rahr & Sons Brewing Company, consistently leads the Flying Saucer taproom orders. The brewery started up in Ft. Worth in 2004, but their family has been brewing since 1847, when they arrived in Wisconsin from Germany. That turned from kitchen endeavors into a highly successful brewery and then a business that now produces and supplies malt and brewing supplies to 90 percent of America’s breweries.

In Texas, Fritz Rahr, the great-great-grandson of that Wisconsin beer visionary, now has his own Texas brewery that offers 17 types of craft beer, and all in cans. Because “it’s better for the beer (less exposure to the enemies of beer—light and oxygen); it’s better for the environment; better for everyone.” That last one is all about cans getting cold fast. And what beer drinker can’t appreciate that.

Their Rahr’s Blonde harkens back to Fritz’s 170-year-old family roots. A Helles lager, though light-golden in color, is fuller-bodied and the malt is bready, keeping it light and crisp. Or step outside the norm and try their Iron Joe. An oaked Scottish ale layered in deep, luscious flavors of roasted malt, fresh coffee, and American oak offset with unique notes of chocolate and marshmallow. Kind of like all the best parts of a good campfire scene.

While you’re tasting your way through the ingenious and varied options brewed by DFW craft masters, you might saunter out to The Flying Saucer’s giant beer garden, which offers a stunning view of Ft. Worth. Plus the bricked patio and long trestle tables recall European beer gardens, where strangers sit next to each other and think nothing of it, which could lead to new friends and more beer recommendations. 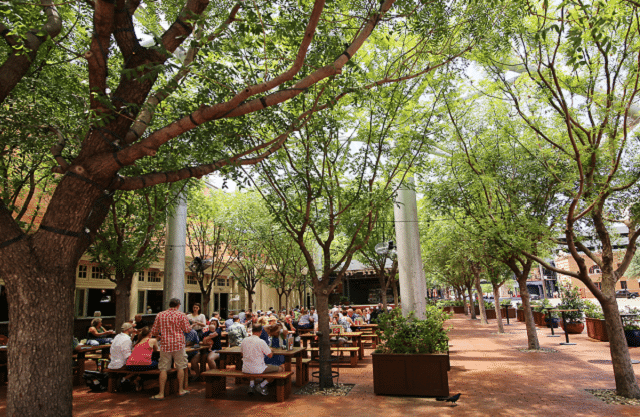 If you find yourself craving an immersion into sports while you enjoy more of the abundance of DFW-brewed libations, stroll over a few blocks to a spot that promises a bombardment of viewing options. Third Street Bar & Grill opened earlier this year and is already a beloved hotspot. There’s good, traditional fare and a short list of regional beers to keep you there. But it’s most amazing feature is the more than 50 flat-screen TVs that dot the interior and crown the bar.

Recent visitor Regina Tijerina summed up the impact of sitting amidst the four dozen screens rather sedately in a Facebook review, saying, “Great place to watch your favorite sports teams.” Which is exactly how your tasting jaunt of Dallas-Ft. Worth beers should conclude—cheering on your favorite team over good food and local suds.