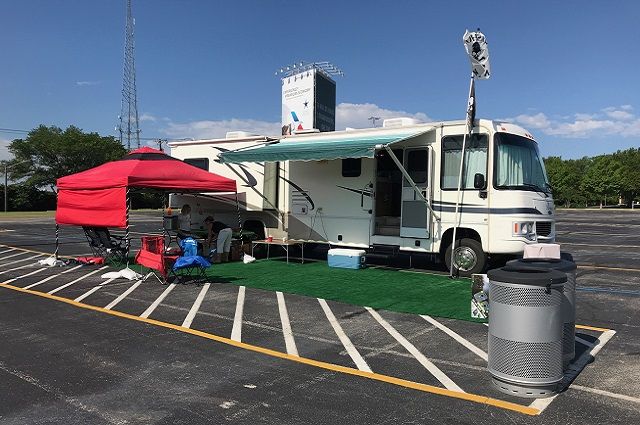 You don’t have to invest a fortune to tailgate or road trip with an RV. You don’t even have to own one. Just rent.

“Basically, you’re bringing a little piece of the comfort of home to the events,” says Mark Hannah, about RVing at tailgate parties. Or anywhere. The Navy veteran and healthcare manager bought his first RV seven years ago when he grew tired of sleeping on the ground during Cub Scout campouts. Now he owns three and, when he’s not using them, he rents them out.

He’s not unusual. Renting RVs has become big business. Outdoorsy.com showcases more than 40,000 recreational vehicles available to book through their owners in 14 countries. And they run from tiny, tiny trailers to massive, luxury Class A motor homes the size of a bus.

They even offer truly unique and custom-built vehicles to rent that make quite a statement and are just darn fun to tailgate in. The Cosmic Pickle stationed in New Orleans, for instance, is a 33-foot-long 1976 Airstream trailer that sleeps five and psychedelically vibrates with color and design. Owner Ryan Ballard says it is “perhaps the grooviest camper trailer in the Multiverse. Fully outfitted with a king-size Posturepedic bed, a giant gold disco ball, five-point restraint mounts, a stripper pole, a mirrored bathroom, a front office and extra bed.” That’s beside the usual kitchen with a full-size fridge, shower, TV and AC. All for just $99 a night.

Or if you’re in the Denver area, rent an ambulance. Literally. Owner Seth Finley converted two ambulances that sleep three and supply all the basic amenities, including running water and a private toilet, completely powered by solar panels. “You can drive it through the desert and stay there for a week if you want,” he says. The solar panel charges a massive 220 amp-hour battery that powers everything from the stereo system and the fridge to the AC and the lights.

For the more original ambulance feel, rent his Vino 911—named in honor of the TV show Reno 911—which retained all the funky storage compartments. Finley and some doctor friends once took Vino 911 to tailgate at a concert dressed in scrubs. “We had syringes—the ones made for drinking—and we filled them with tequila and red Jell-O” he recounts. “People just couldn’t get over it. It was hilarious.” Somebody else rented the ambulance to serve as their bar in their driveway at their housewarming.

The Ambo, however, has more refinement. Finley gutted the whole thing and installed a sink, vinyl wood flooring, and a cedar ceiling with inset lighting. “I used one of the backboards they used on patients as a table, so you can put drinks on it. It sits between two long benches that can slide down to form the king-size bed,” he explains.

Besides the joy of driving an ambulance with its airplane-like control panel of switches and buttons, the customized ambulances offer unprecedented parking options. “The thing about an ambulance is you can kind of park it anywhere,” Finley says. “It’s unmistakably an ambulance, but it doesn’t look like anyone’s inside it because of the blackout curtains.”

And it’s perfect for partying. “You can have 10 people in there standing up and all dancing with the loud music and the disco ball,” smiles Finley, which makes the Ambo popular at Red Rocks, a breathtaking rock formation outside Denver that was formed into an amphitheater for performances. “You can park in a parallel parking spot, party, walk on the top of it, and then sleep in it. It’s a lot of fun at Red Rocks. You got to experience the Ambo. Everybody loves it.”

But the ambulances are more than party machines. One woman rented Vino 911 to transport her recuperating father home to North Dakota. “He needed to be laying down the entire time, so she just had him lay in the bed,” Finley says. “It was like a 1,000 miles roundtrip.”

From June through August, the ambulances are well booked with tourists to the Rocky Mountains. However, come fall, they are available for tailgaters heading to the Denver Broncos and Colorado Buffaloes football games. They also make a cheap option for bachelorette parties, says Finley, with Vino 911 renting for $160 per night and the slightly larger, 21-foot, decked-out Ambo going for $260. 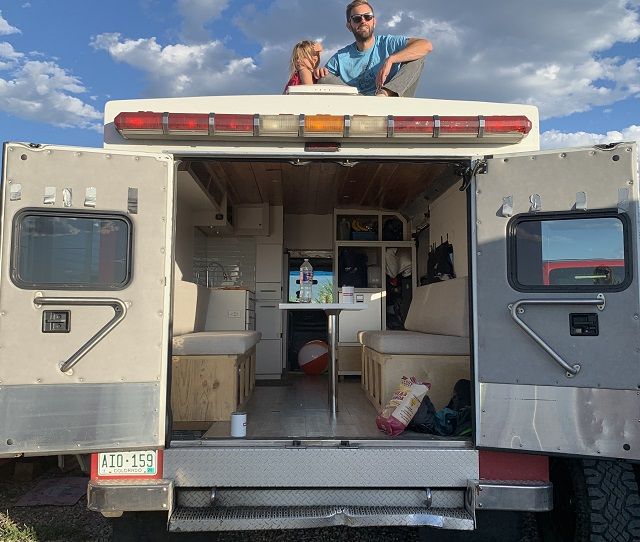 Prices drop dramatically when you choose a trailer RV. Surprisingly to many, they offer the same indulgences as a high-end motor home, including the pop-out side panels that can add enough floor space for sofas and dinettes when the camper is at rest.

Brian Dowling of Southern Michigan Camper Rentals posts 11 campers on Outdoorsy. They run from a 17-foot pop-up for $20 per night to a 36-footer that sleeps 10 for $41 per night. You can even rent a 2017 Chevy Silverado truck to haul it for $23 a night. Or for $100, Dowling will deliver the travel trailer and pick it up within 25 miles.

Travel luxuriously by choosing the 32-foot Coachman Catalina that sleeps 10. It includes a set of double-size bunkbeds, a private master bedroom, and the roomy shower serves as a small tub as well. “It’s good for toddlers, let’s say,” laughs Dowling. But for tailgaters, it could make an ideal cooler.

For tailgaters, campers offer not only your own private bathroom, but many come with a large awning—often electric—outdoor flat screen televisions, speakers and a kitchen as well. “A big panel pops up and latches, so it’s all at counter-height. It’s usually a little two-burner stovetop, a sink and a mini fridge,” describes Dowling.

Being just 10 minutes away from Michigan International Speedway, most of his tailgaters want travel trailers for the two big NASCAR races held annually. “The June race is already 100% booked,” he says, adding how people are catching on to the positives of RV rental. “Two years ago it was a few weeks before the race before we’d be booked up.”

But despite the spike, people still hesitate to rent, Dowling says, “because there’s a stigma that renting means old and crappy. But they’re always surprised at how nice everything is.” Because though rentals may be years old, owners scrub them up nicer than hotels, update appliances and surfaces, and stock them with the essentials, like utensils, paper towels, linens and sometimes even a gift basket.

For the NASCAR renters, the campers offer access to the climate-control of AC, fresh water, a place to take a break from the roar, and somewhere to call home for the multi-day tailgates.

The infield renters generally rent two or three spots together. “They put a camper on one site, usually in the back, and put their bar up toward the front, where they can talk and be social, because everyone wanders around in the infield,” Dowling says. The renters who park in other campgrounds surrounding the track usually stay all week and are often retired or have families. “They sit out, talk, have a few beers and relax,” he adds.

Unlike motorhomes, though, campers don’t automatically come with generators. Dowling recommends renting or bringing one to run the AC and eventually the lights. “The fridge runs off propane, and the lights are on a 12-volt battery, so you don’t have to have extra power, but you’re going to kill the battery eventually.” Among NASCAR renters, about half rent a generator from him and most of the others bring their own.

Dowling loves his NASCAR renters. He triples the rates for those renting to attend the annual country music festival at the racetrack. “They’re out of control. They break stuff. There’s stuff in the toilets…NASCAR fans, though, they respect their stuff. I’ve gotten it back cleaner than when I gave it to them.”

Besides the price, there is another advantage to campers over motor homes, Dowling says. “If you need to go get something, you can unhook and drive to get it without losing your spot.” Or having to pack up all the lawn chairs, cornhole, grill and other tailgating paraphernalia. 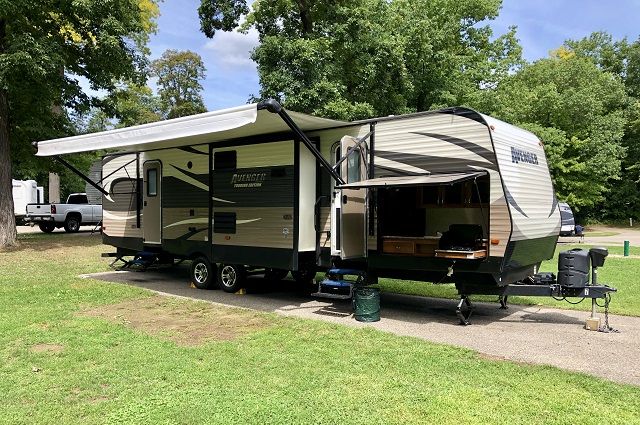 Home, Home on the Range

For those wanting it all in one package, motor homes are the way. For the ultra-luxurious, Mark Hannah in Oklahoma offers up his 2016 Forest River Berkshire 38A Class A Diesel Pusher Motor Coach with three slide-outs, bunk beds, two bathrooms, two AC units and six TVs for six to eight people. It’s $319 per night.

Hannah recommends it for trips over four hours. And for those wanting extra amenities like an outdoor shower and washer/dryer. “It’s got a lot of room, and it’s a diesel, so it’s a lot more efficient,” he says a bit dreamily. “And it has a higher ride suspension, so you just float going down the road.”

Which Hannah says people don’t expect in these large coaches. Or they fear they’re too big to handle on the road. “They’re actually very easy to drive,” he says. People also think the class of the RV—A, B or C—must match the class designated on their driver’s license. “I actually dispel that myth the most.”

RVs, despite appearing bus-sized, don’t need any special driver’s license. “We take them driving to be sure they’re able to operate it, because I don’t want anyone to feel uncomfortable. People are mostly surprised at how easy they are to drive.”

But the behemoth and grandiose Diesel is only one of three motor coaches Hannah offers for rent on Outdoorsy. He recently added “Carlos” to his flock of RVs. The 2019 Winnebago Intent that sleeps seven is named after the baby from the movie Hangover, and rents for $275 a night with Oklahoma teachers and veterans receiving a 10% discount.

And last June, after only tailgating one season at University of Oklahoma football games, he bought a 28-foot Entegra Coach Odyssey. Dubbed the Ultimate Tailgater, it sleeps eight in two queens, a double and a twin. “It’s a Class C, smaller than the Diesel, more agile,” Hannah says, who’s renting it at $188 per night. “It has an outdoor kitchen. And on this one, we have an outdoor TV and outdoor speakers, so you can listen to the game.” He also carries his smoker on the trailer hitch, “so when we go to OU games, we got it all.”

Not being an alum, Hannah parks the Ultimate Tailgater in the non-alum designated lot at the Lloyd Noble Center outside the basketball arena at OU next to the alum RV lot. He gets there early.  “We’re there all day Friday to get set up, start enjoying the festivities, get into the spirit,” Hannah says.

The lot runs about 20 percent occupied Thursday night. By Friday night, it’s 80% full, “and we’re not exactly roughing it either,” he adds with a chuckle. On Friday night, the OU band comes out and starts playing in the RV lots. “We just really love it.”

When you decide to rent, besides working out the liabilities, mileage fees and insurance, Hannah warns to be aware of what comes with the RV. Not all owners provide the basics like dishes or towels or water as part of the rental. And some may even charge for using the toilet.

Hannah throws in DVDs, cards, poker chips, grills and director’s chairs for outside. Even the charcoal. “We want to make an experience where they only have to bring their food, their family and their clothes,” he says. As an even nicer touch, they provide a gift basket with coffee, microwave popcorn, fresh fruit and granola bars.

Over the last two years, Hannah totaled 220 rental days between his two RVs. In total, Outdoorsy reports renting nearly 1.7 million nights of travel over the last five years. Interestingly, 40% of the renters were under 40. Hannah says it’s not about the numbers, though. “It’s just fun. What we love about RVing is the journey and the experience of not having to be crammed into a car,” states Hannah. “You can compare it a lot to the movie “Vacation”, where it’s, ‘hey, let’s stop and look at the big ball of mud.’” Clark Griswold would be proud. 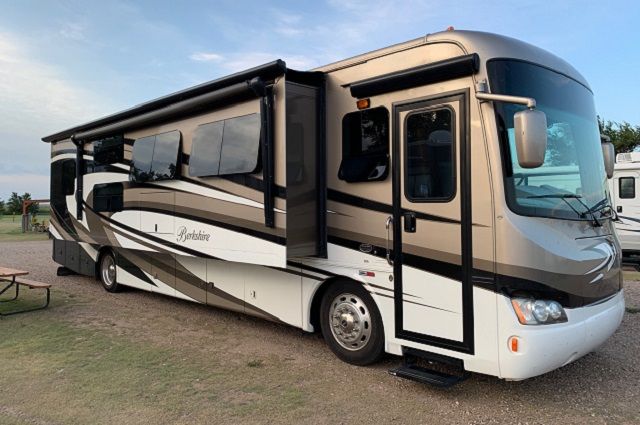