Once We’re Back in the Saddle 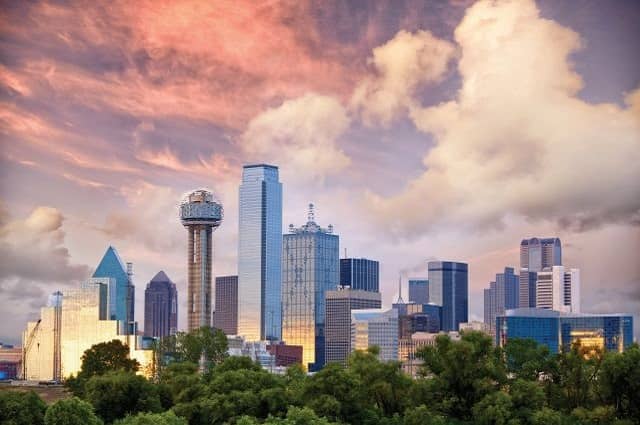 At some point, we will once again be sitting courtside, filling stadiums and cheering until our throats grow hoarse. And when that happens, you might want to set your sights on Dallas.

Craving a hit of live sports? Thirsting for the road? Then Dallas makes the perfect destination to satisfy. A getaway to this modern metropolis with an Old West attitude lets you not only drink in the prowess of great athletes, but great athletes from six major professional teams.

If you ask Dallas native Michael Haynes who his favorite local team is, he’ll tell you his alma mater Southern Methodist University comes in first, followed closely by the MLB’s Texas Rangers. The Rangers have made eight appearances in the postseason, and brought the World Series home to Globe Life Park in 2010 and 2011.

The 2011 American League Championship Series sticks out as Haynes’ favorite baseball memory, but it’s one he very nearly missed. “We had actually sold our tickets to Game 2, and immediately regretted it,” he says. He and his wife planned to use their ticket earnings for the next season. But then, 30 minutes before the first pitch, someone offered him two tickets to the game.

After finding a friend willing to drop everything for a last-minute adventure, Haynes and his friend rushed to the ballpark and sprinted the umpteen miles to the stadium from their car, pausing only to finish a beer or two. They made it to their seats in the middle of the first inning.

In the bottom of the 11th, the Rangers rallied for three hits to load the bases as right fielder Nelson Cruz stepped to the plate with a chance to finish the game with one last swing. After falling behind 1 ball & 2 strikes he hit the first walk-off grand slam in MLB postseason history to give the Rangers the win. The stadium erupted as he rounded the bases, crossing home plate amid a mob of excitement from his teammates.

After winning the ALCS series, the Rangers fell to the St. Louis Cardinals in the World Series, but Haynes will never forget the roaring “Nelly Cruz” chants that filled the stadium air that night.

“For a fan like me who has literally been a Rangers fan for the last 40 years of my life, it was unbelievable,” Haynes said. “We still talk about how amazing and magical that whole game day was.”

When baseball finally begins play, the Rangers and their fans, will get to enjoy the new $1.1 billion, air-conditioned, retractable-roof stadium. 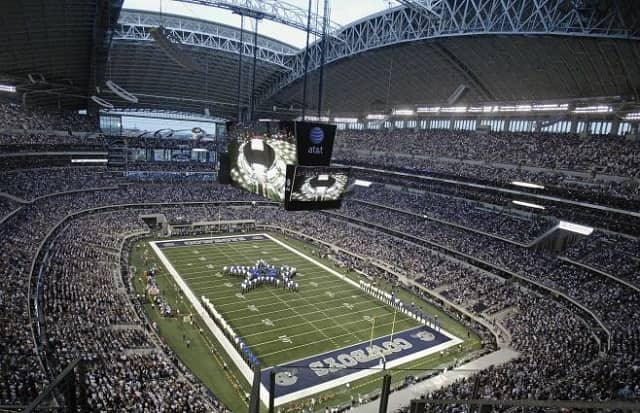 The Rangers are loved, but there’s no questioning who dominates the Dallas sports scene. In Texas, where football is king, the NFL’s Dallas Cowboys reign supreme. Smack-dab between Big D and Ft. Worth, the Cowboys play their home games at AT&T Stadium in Arlington, 19 miles from each city.

The Cowboys hold five Super Bowl titles (1971, 1977, 1992, 1993 and 1995), tying with one of their NFC rivals, the San Francisco 49ers, and are the only team in the league to record 20 straight winning seasons (1966–1985), missing the playoffs only twice during those years. It’s an NFL record that remains unchallenged, though the Patriots are mighty close with 19 seasons under their belt as of last year.

Known as “America’s team,” the Cowboys have a fanatic national following. With an estimated net worth of $5 billion, the Cowboys have been the world’s most valuable sports franchise for four straight years. And let’s not forget about those Dallas Cowboys cheerleaders.

Excitement is returning for Cowboys fans, with a young core of players who are expected to power one of the NFL’s most prolific offenses for seasons to come. With the recent draft of CeeDee Lamb out of Oklahoma and the addition of new head coach Mike McCarthy, players like Dak Prescott, Ezekiel Elliott and Amari Cooper look to take the next step in annually contending for the NFC East, and return championship football to Dallas. 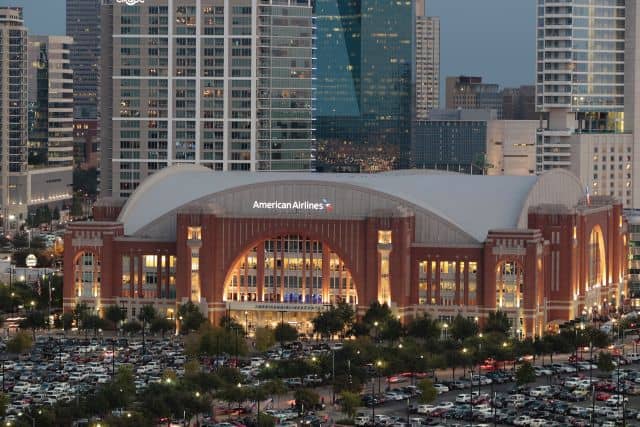 Like the Rangers, Dallas basketball sports fans last witnessed their big-league championship in 2011, when Dallas Mavericks brought home the NBA Championship. Yet the Mavs dominate the league’s sellout streak. Begun in December 2001, the team has sold out 815 consecutive regular-season and playoff games combined as of February 2020.  This is the longest sellout streak in NBA history.

The present and future of Maverick basketball involves a passing of the torch from long-time franchise star Dirk Nowitzki to the young Slovenian-born Luka Doncic. He was selected as the third overall pick in the 2018 draft by Atlanta and was traded on draft night for fifth pick Trae Young and a 2019 pick. While these two players’ names will follow each other for their careers due to the draft night trade, Doncic has solidified himself as one of the preeminent rising stars of the NBA and is a front office’s dream to build around. His well-rounded abilities of scoring, assists and rebounding make for an exciting future for the Mavs and their loyal fans.

A second professional basketball team moved to town for the 2016 season, when the WNBA’s Tulsa Shock became the Dallas Wings. One of the first WNBA expansion teams, the Shock was formed in 1998 in Detroit. The team faced a rocky start, but became the first in WNBA history to go from last place one season to league champions the next, winning three championships (2003, 2006, 2008) and four conference titles.

The young team has struggled in Dallas, but despite the hurdles caused by the coronavirus pandemic, it celebrated a successful draft this year, giving fans hope for an exciting future ahead.

The Mavs share their home at American Airlines Center in downtown Dallas with the NHL’s Dallas Stars. Originally founded in 1967 as the Minnesota North Stars, the team relocated to Dallas for the 1993–94 season.

Five years later, they took home NHL’s grand prize, the Stanley Cup. While based in their southern home, they have also snagged eight division titles, two Presidents’ Trophies as the top regular season team in the league, and won the Western Conference championship twice.

But can a football-obsessed city like Dallas ever become a hockey town? Perhaps not, but attendance records show a steady fan loyalty. Average attendance in the last four seasons has topped 18,000, with ESPN ranking them 3rd in the league last season with an average of 18,782 for home games. That’s nearly the 20,000 sell-out status attained by the Mavericks at the same arena.

The Stars fan power really shined when they brought the NHL’s annual Winter Classic to the Cotton Bowl on New Year’s Day this year. As the players stepped off their buses, clad in cowboy attire, they were met with a Texas-style rodeo on the state fair ground’s nearby Midway, complete with mechanical bulls, corn dogs and pig races.

Even more incredible than the frozen outdoor ice rink on a 57-degree day in Texas and the team’s 4–2 comeback win over the Nashville Predators (both teams come from nontraditional hockey markets) was the size of the crowd. Nearly 86,000 fans filled the famous stadium, the second-largest crowd ever at an NHL game.

FC Dallas (formerly the Dallas Burn) has been a member of Major League Soccer since its inception in 1996. In 2016, the team won the Supporters’ Shield, an annual award given to the MLS team earning the most points in regular season games, and won the U.S. Open Cup in 1997 and 2016.

In recent years, the team has gained recognition for its successful farm system, the FC Dallas Academy. When it was formed in 2008, the goal was to build a community of generational soccer fans while also creating players who would one day join the club’s first team. It’s now considered the top academy in the U.S. for developing high-quality players, made apparent by clubs around the world coming to Dallas to recruit their next star players. For example, standout Weston McKennie played for the academy before joining German club Schalke 04 and the United States national team.

While the international transfer business is necessary and lucrative, FC Dallas isn’t ready to give away all of its star talent. Instead, they founded the North Texas Soccer Club in 2018, a USL League One team that operates as their reserve team. In their first season, they won the regular season and overall championship title. That kind of success makes keeping talent in Dallas a whole lot easier.

The club has churned out 26 homegrown players and has a bold goal of one day forming its entire starting team with players from its academy. Talk about a hometown team!

With every major sport represented in the Big D and followed nearly fanatically by loyal fans, a trip to Dallas will be a sports-quenching immersion after this long drought of action. Even NASCAR and IndyCar zealots can get a hit of their high-speed motorsports at Texas Motor Speedway, just 38 minutes from downtown Dallas.

So though it may not yet be time to buy the tickets, it doesn’t mean you can’t start dreaming of a deluge of gridiron, diamond, ice, court and track mayhem and grace, where the (lone) star points to Dallas.