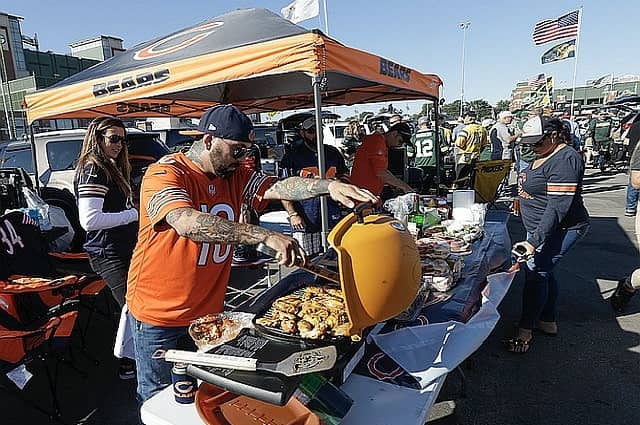 The turn of a new year always inspires a slew of goals and personal commitments—many of which are forgotten about or abandoned by the end of February. Take a look at this fun list of Tailgating new year’s resolutions that you are more likely to remember (and follow through on) throughout the year!

Whether it’s cornhole or beer pong, tailgating games are essentially the appetizers to the big event. Surrounded by friends and family in the parking lot or in the den is the time to shine. All eyes are on you, and your teammate is counting on you to make the shot. Keep practicing your toss and technique. Or, when in doubt, choose a partner who is equally unskilled so that way the bar is low, and your small victories feel more triumphant!

Hosting an A+ get-together is not as easy as it looks. You’ve got to make sure the food, atmosphere, and music are right. As the planner of a birthday, holiday, or backyard BBQ party dinner, you are the conductor, orchestrating all aspects of the day. As such, your best tool is delegation: have a neighbor bring the beer, enlist a friend to help source some appetizers, and put the teenagers in charge of the sound system.

The number one New Year’s resolution is to be healthier, and that wide umbrella inevitably encompasses  “drinking less alcohol.” If that’s one of your goals, we’re here for it—kudos to you! But keep in mind that drinking less can also look like “drinking less of the alcohol that’s not so great for you.” Look into a low-calorie hard seltzer or cocktails made with less sugar as an alternative.

Maybe 2023 will be the year we put down the Pabst Blue Ribbon and pick up the bourbon. Learning more about different spirits can expand your palate as well as your mind. There are tons of resources, from books to online blogs to learn from. Better yet, stop into a nearby cocktail bar and pick the bartender’s brain every now and then to gain a few nuggets of knowledge. A well-studied man of alcohol is more appreciated than a man who can shotgun three cans in under five minutes.

Ambitious? Probably. But getting creative with a few different recipes on your pellet smoker grill is a great resolution to strive for this year. Aim to grill at least one new food each season. If you always stick with boring chicken, try a salmon filet or lollipop pork chops. Consider grilling vegetable kebabs with red bell pepper and yellow squash for a colorful yet nutritious side.

Don’t be ‘That Guy’ at the Party

You know which one we’re talking about. The guy who shows up late when everyone was expected to arrive by 3 p.m. The guy who was supposed to bring a pack of hot dogs and buns but left them both at home. The guy who picked a lame playlist and now everyone is standing around awkwardly wondering why Frank Sinatra is playing through the Bluetooth speaker. From this moment forward, let’s not be that guy.

Cheer for the Winning Team

Since there’s not much you can do to see your team go for the gold this upcoming season, pray to whatever deity you believe in, cross your fingers, or wish on a shooting star with the hopes that your favorite team makes it to the playoffs. Continue to be a faithful fan through the good plays and the bad plays; but if your track record is in the mud…it’s not too late to switch teams.