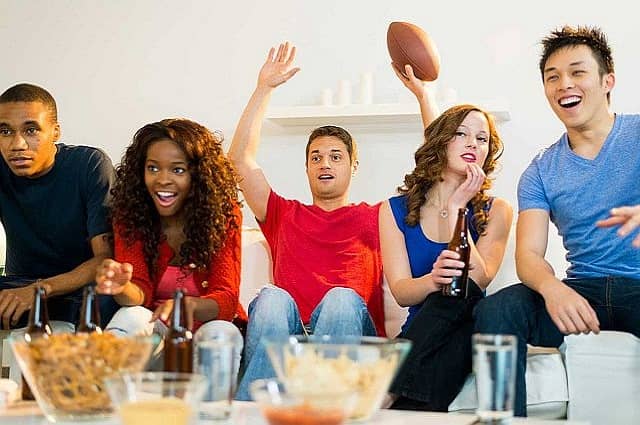 When the mercury plummets, your parking lot party doesn’t have to do the same. Instead of canceling a day of fan cheering fun, cross Mother Nature off your guest list and park your tailgate party indoors with these must-know indoor tailgating tips!

Sure, tailgating is meant to be an outdoor activity; you’re absolutely right. However, fingers and toes are also meant to stay attached–not fall off from frostbite. When it comes to taking one for the team, don’t be a hero. Try these tips to sacrifice the fresh air and get the tailgate party started inside.

Space—or lack thereof—is definitely the downside of tailgating indoors versus out. Not only are guests confined by the square footage of your home, but your home is also at the mercy of your guests. Instead of going back to frat party days of old, keep your guests comfortable and your house in one piece with the following:

ASSIGN ZONES: Break up your home into spaces where guests can and can’t go, as well as according to how you want each room used. For example, guests always seem to flock to the kitchen, but that’s usually because it’s where the food is. If your kitchen is tight with just two people, move the eats to an area where there’s more elbow space. If there will be kids at the party, keep them out from underfoot by designating a room, such as a spare bedroom or basement, where toys, movies, and games are set up to keep them entertained.

FIND A FLOW: You might think that pushing a buffet-style dining table against a wall would free up the room for more space. However, keeping both sides open allows for easier food service so that more people can grab their grub and get back to the game. In the rooms that guests will be in most, temporarily rearrange furniture to maximize ease of moving around without getting in each other’s way.

K.I.S.S.:  When you’ve got a crowd under one roof, it’s best to follow the old “keep it simple, stupid” rule. You don’t want to have to give house rules to each person that comes through your front door, so try to make how you run your house as intuitive as possible. If your dog is allergic to human food, attach a note to his collar so that he doesn’t accidentally get fed. Put out labeled trash cans for waste and recyclables to avoid unwanted red-cup decor. If you want shoes off at the front door, display a few of your own pairs as examples.

A true Game Day Guru knows that the best tailgate party can’t happen with a team of one. Instead of trying to do it all solo, enlist the help of your guests so that you can throw your party and have fun at it, too.

FRIENDS WITH FOOD: If you’ve ever hosted a holiday meal in your home, you know how quickly oven-crowding can occur. And having hosted past tailgates, you’re also well aware of how popular chips and dips are as a gameday bring-along. Avoid both problems—while also eliminating a tailgate spent in your kitchen—by assigning dishes for your guests to bring. Pay special attention to how many hot dishes may need to be reheated when they arrive and offer up grocery store suggestions to those who aren’t as recipe savvy.

PLEASE BE SEATED: Don’t have enough places for people to pop a squat when watching the action on TV? Ask your guests to come to the rescue. The same portable chairs they bring to the parking lot work well indoors, too (just check that their feet are clean first). Also, ask guests with large families if they have folding chairs to spare. Space too small for bulky chairs? Add ottomans, poufs, and big throw pillows on the floor for easy DIY seating.

Just because you’ve moved the party to a more temperate climate doesn’t mean it’s any less of a tailgate! The devil is in the details, so even inside, you can still throw one hell of a celebration.

SET THE SCENE: While colorful tents, umbrellas and flags were made for the outdoors, inside you can go with less weatherproof decor options. Streamers, balloons, paper tablecloths and pennants add easy team touches throughout your space. If you don’t want to spend a lot of money, look for ways to reuse your outdoor items inside. For example, put out bold bleacher blankets on the sofa. Toss stadium cushions on the floor for simple seating. Tack t-shirts, sweatshirts and jerseys to the wall for instant team-themed art.

AIR THE ACTION: With few exceptions, most of your guests will want to catch the game. If your TV is located in a room that can house everyone, then you’re all set. However, if you don’t have enough space for that, broadcast the game in multiple places. By streaming over the Internet, you can use a desktop computer in one room, play radio coverage of the game in another, and rely on other gadgets to offer audio in yet another.

GET IN THE GAME: Cornhole and ladderball are better in wide open spaces, but that doesn’t mean your tailgate has to be devoid of games. Create custom BINGO cards to give to guests, where the squares are filled with common game day occurrences. For example, on a football card, you could include a touchdown, a penalty, a safety, an injury, a cheerleader, and so on. Add commercial topics for entertainment during timeouts and halftime.

Maybe indoor tailgating isn’t as traditional as those held outdoors but being comfortable really does go a long way toward having more fun. When old-man winter looks to ruin your fan day, skip the elements and make the best of it inside with these must-know indoor tailgating tips!