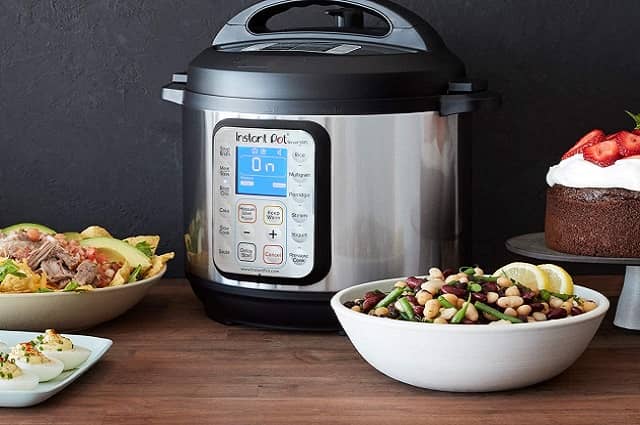 Instant Pots are the superheroes of kitchen appliances in the 21st century. These food incubators are known to draw a cult-like following, having sold 300,000 units on Amazon Prime Day 2018. The Instant Pot, which is in its eleventh year of existence, is likely the most popular multi-purpose cooker brand for its all-in-one capabilities. From pressure cooking to slow cooking, steaming, warming and even sautéing, you’ll soon understand what all the hubbub is about, if you haven’t already.

Instant Pots cook up to 70% faster than the standard singular-function cooker because it uses pressurized steam to heat food relatively quickly without drying it out. They come in a variety of sizes and wattages, but where the models begin to differ is in terms of built-in heat and pressure levels. From making rice to sautéing veggies, or simmering your favorite sauce, the recipe possibilities are endless.

Take a look at some of our top Instant Pot top picks.

The Instant Pot Duo takes the grand prize. With seven different cooking functions, including yogurt setting, it’s no wonder this is a best-seller. The 6-quart is probably your best bet; it has the ability to cook a 5-lb. frozen chicken in one cycle.  With a moderate price tag, this makes it an honest choice. This cooker will replace several of your most common kitchen appliances and leave you reaching for your Instant Pot every time.

We love any opportunity to hook up a cooking gadget to the internet. The Instant Pot Smart Wi-Fi connects to your phone through the Instant Pot app for remote monitoring and notifications. Also compatible with Alexa or Google Assistant for complete hands-free accessibility via voice commands. With the app, you also have access to over 1,000 pre-programmed recipes which helps take out the guesswork over what to have for dinner.

This goes without saying, but Instant Pots in general are perfect appliances for apartment living. Opt for the 3-quart Instant Pot Lux Mini, which is ideal for one-to-two-person meals. The Lux Mini requires less power supply and takes up less space on your countertop. Ridiculously easy with the one-touch program buttons, this model features a more basic interface, without all the bells and whistles.

Here are a couple pieces of advice to help you make the most out of your Instant Pot experience:

Liquid is a must

No matter what you’re cooking, you need water to cook effectively in the Instant Pot. This is integral to the device’s efficient cooking speed because it builds up steam from the liquid.

Contrary to how you’re used to making spaghetti, wherein the noodles get completely immersed in liquid, when cooking in a pressure cooker, you’ll want to put the pasta on top. If you don’t, your noodles will likely become very mushy.

Meat goes on the bottom

Meat has a relatively thicker density than that of vegetables, rice or pasta, therefore it can take the heat. Your chicken and pork chops are less likely to char or become dehydrated.

Okay, we know we couldn’t just glaze over the yogurt part from earlier. Yes, your electric pressure cooker can make yogurt. No it is not difficult, especially with the convenient yogurt function on the control panel. FYI: Homemade yogurt is much creamier and has less tang than store-bought yogurt, so don’t knock it till you try it!

Meal prep has never been easier

Let’s say you need to make a dozen hard boiled eggs that you want to ration over the course of the week for breakfast and lunch. Total cooking time comes to about 15 minutes (five minutes to pressurize, five minutes to cook, and five minutes to release the pressure). This is still much faster than stovetop boiling, plus you get a lot more eggs done at once.

We receive commissions for purchases made through links in this post.