How to Host a Beer Float Social 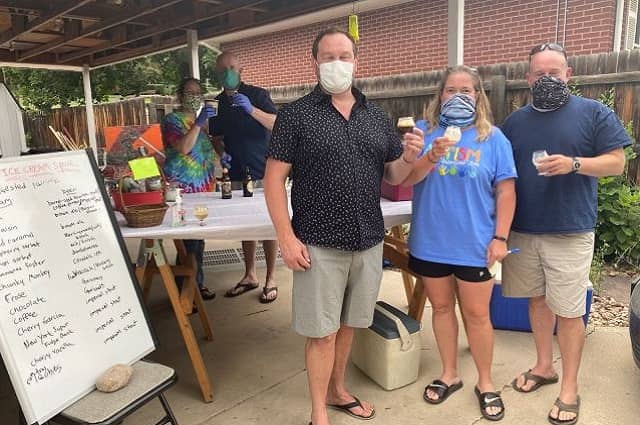 Ice cream may seem to be a summer treat relegated to youth but scoop it into a glass and pour over a beer, and it becomes transcendently adult. And fun. And combining the two in a beer float provides an excellent reason to bring people together for a “floatcial.” (Credit to friend Jim Clawson for coining the word.)

To test pairings suggested by Ben & Jerry’s, Jeni’s Splendid Ice Creams, several breweries, and certified cicerones, I organized a backyard beer-ice cream happy hour. My final list represented a mix of generic and branded ice creams matched to general beer styles and specific beer brands. For several hours, friends and neighbors played mixologist, enjoying the alchemy of beer and ice cream. We will do it again, and when we do, we will remember the following tips.

Tip 1: Limit the number of pairings to four or five, and buy less beer than you think you need. I ended up with far too many options—about 15 ice cream flavors and almost as many beers. I had anticipated that each person would drink at least two beers, and thus would drink two floats. Didn’t happen. Floats are a rich dessert, so most people drank the equivalent of one beer.

Tip 2: Go for variety. The go-to advice is to pair an ale (porter, stout, brown, IPA) with a basic ice cream, usually vanilla or sometimes chocolate, but the creameries and beer experts pushed the palate envelope. They suggested combinations such as rum raisin with a brown ale or Belgian dubbel, or raspberry sorbet with Berlinerweisse or a Kolsch, or coffee with an imperial stout. The favorite union at my party proved to be a tie, and neither was the one everyone predicted would be the hit (salted caramel and Guinness). Ben & Jerry’s Chunky Monkey with New Belgium’s Citradelic IPA tied with raspberry sorbet and Mountain Toad Brewing’s seasonal blueberry Kolsch.

Tip 3: Use tasting glasses. The smaller glasses enable guests to try more than one beer float without committing to a full 12 ounces or a pint.

Tip 5: Whether you first dish the ice cream or pour the beer, know that when the two meet, things get frothy. Make sure you leave plenty of room in the glass for the delicious chemistry.