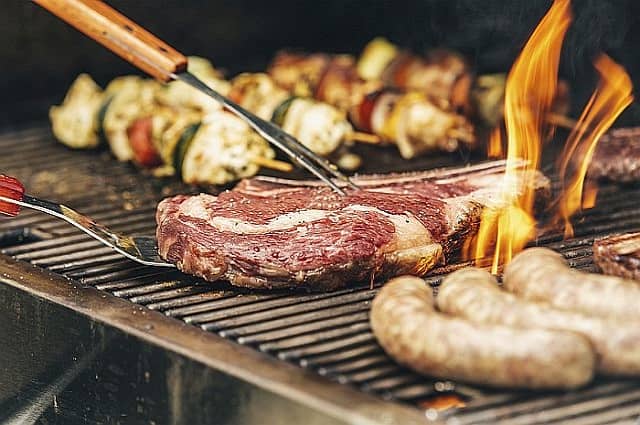 This summer, 71% of American plan to attend or host a cookout. But the more than 10,000 grilling-related injuries reported every year, on average, underscore the importance of grill safety.  Given the prevalence of alcohol at summer barbecues, it becomes more important to be vigilant of potential grilling-related accidents and avoid these grilling mistakes

According to insurance provider Value Penguin, 13% of those who own or have access to a grill report having suffered a grilling-related injury.  Additionally, data shows that alcohol can increase the likelihood of being injured at the grill. In fact, a drunken griller is four times more likely to be injured than a sober counterpart.

At the same time, accidents at barbecues don’t come in one form. To this end, 22% of Americans believe they have contracted food poisoning at a cookout. One possible explanation for this is that 67% of grillers say they don’t use a thermometer to check whether their meat is fully cooked. And nearly half don’t clean their grills after each use.

The chances of experiencing a grilling-related injury increase significantly when alcohol is involved. Despite the risks, it’s common for people to grill while intoxicated. Nearly 40% of grillers say they’ve captained a grill while drunk, with nearly 10% admitting they’re drunk most times when grilling.

Drunken grillers, though, are four times more likely to be involved in an accident than sober cooks. Nearly 25% of drunken grillers have had a grilling-related accident, compared with only 6% of those who barbecue sober. This may affect middle-aged Americans most heavily. According to Value Penguin’s findings, millennial (age 25 to 40) and Gen Xer (age 41 to 55) grillers are the most likely to grill while drunk.

With such a large number of people attending barbecues this year, it’s more important to be on the lookout for unhealthy food preparation, you may be in the market for a new grill. If so, a pellet grill is one that you should consider.  Traeger is one of the options available, but what is the best Traeger grill?

Nearly 25% of Americans believe they contracted food poisoning from a cookout in the past. Nearly one in three millennials and 29% of Gen Xers recall getting sick from a barbecue — the most affected age groups.

One reason why food poisoning may occur at a cookout is due to insufficiently cooked meat. Indeed, two in three grillers don’t use a meat thermometer to verify that their meat is safe to serve and eat. About 40% of grillers prefer to cut the meat open to see how it looks. This may be fine for steaks but cutting open bone-in pork or chicken may produce mixed results as the meat takes longer to cook the closer to the bone it is.

Another reason cookout attendees could be beset with food poisoning is because of the sparse cleanings many people give their grills. Nearly 20% of grillers only clean their grill’s surface after four or more uses. Cleaning one’s grill with a bristled scrubber helps dislodge old food particles, which might otherwise spoil.

When it comes to grilling and home insurance, 39% of grill owners aren’t sure whether they would be covered for grilling-related accidents. Baby boomer (ages 56 to 75) grill owners are the least likely to know how their insurance treats grilling, with 55% unsure. Following this demographic is Gen Xers, 39% of whom aren’t sure whether their insurance policies would cover a grilling accident.

There are a few potential complications that could come into play if a griller experiences an accident. Home insurance coverage doesn’t apply if the damage stems from an improperly maintained or serviced grill. If a propane leak causes a fire, and it’s due to a faulty fuel line that a griller knew about but neglected to fix, they would have difficulty getting reimbursement for damages. Similarly, if a breakdown results from mechanical failure or wear and tear, most insurers won’t cover those damages.

Finally, it’s possible for a homeowner to be the target of a lawsuit if a guest at a barbeque they were hosting was injured and they decided to press charges. The liability portion of the host’s homeowner’s insurance would provide financial protection by covering the costs of a lawsuit — even if the host were to lose the judgment.

Liability claims do raise the cost of homeowners insurance, but the cost of such a price increase is offset by the savings the homeowner gains from their liability protection by not having to pay legal fees. Homeowners may purchase additional liability coverage in the form of an umbrella policy in order to make sure they’d be fully protected against a costly lawsuit.

Now that you are armed with this grill safety information, play it smart this summer and avoid a trip to the emergency room.