10 Tailgate on a Budget Tips 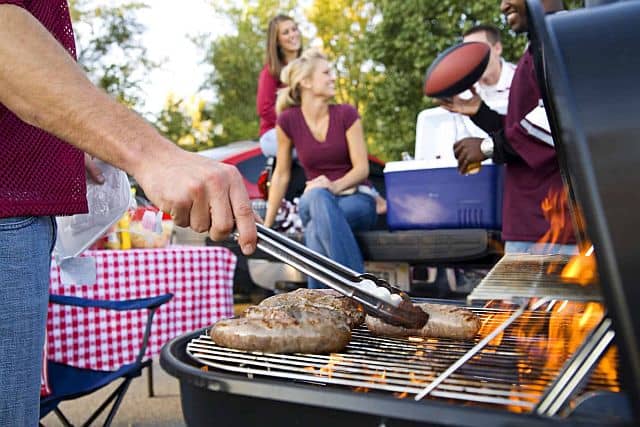 Whether you’re in college, a recent college graduate or just someone who has limited financial resources similar to a college student, tailgating may seem out of reach for your empty wallet. Add up the cost of food, alcohol, tents, grills, plates and cups, games, and so on, and it’s no surprise the endless list of expenses feels too rich for your blood. And that doesn’t even include tickets into the game!

Before you ditch the parking lot party to retire to the couch, catching the game on a poor-reception TV, try these cheap and easy tips for throwing a boss tailgate without the boss’s budget.

Red adult beverage cups aside, now is not the time to be a hero and run the tailgate show on your own. Achieving Game Day Guru status is as much about your delegating skills as it is about being a kick-butt host. Bring in your buddies to pool available funds and abilities with the goal of throwing an impressive party that doesn’t break the bank. Assign duties to each person, putting one person in charge of food, one in charge of beverages, one in charge of serving pieces and so on. Be the point person for everyone to check back with, but don’t get stuck footing the entire bill on your own.

The origin of the word “tailgate” comes from the hinged door that opens and closes on the back of a truck. Parties started here, where coolers of snacks and beverages were packed for people to grab and enjoy while swinging their legs from the open bed of the parked vehicle. Tents, tables, chairs, grills and more may be nice additions to have, but not at all a must. Stick to brass tacks and don’t get ahead of yourself on items you can invest in later when money isn’t so tight.

If you’re going to the game, parking lots closer to the stadium are typically more expensive than those requiring a bit of pavement pounding. Find a lot that’s still full of fans but saves you $10 to $20 in exchange for the scenic walking route to the game. If you’re really strapped for cash, skip the live game (tickets are probably out of your budget anyway), and move the team cheering section to your garage, backyard, driveway or local park.

If you’re in charge of bringing food, get more for your money by shopping the frozen section of your grocery store. While fresh may be best, frozen hamburger patties, bratwursts, chicken breasts and other foods can be bought in bigger quantities for less money. Bonus: Throw them in the cooler to thaw, and they’ll reduce the amount of ice you need to buy.

Since you’ll likely be in need of large volumes of food and beverages, find a friend or family member with a warehouse club membership to get better deals on the sustenance you serve than most grocery stores offer. Using pooled resources, stock up on just about everything you need from this one-stop shop, including meats to grill, premade sides of coleslaw, baked beans, and potato salad, filler foods of chips, dips, and other apps, and of course, beer and liquor aplenty.

Want to host a food-packed event but don’t have the spendy budget to serve it up? Invite a bigger group of people. You may think that a larger party means more expenses, but when you turn that party into a potluck, with each guest bringing a dish to share, you’ve really created a more efficient way to feed the masses. Create an online sign-up sheet where guests can add their names to categories of appetizers, sides, main dishes and desserts. After all, you don’t want to end up with 12 bags of chips and 12 jars of salsa.

If you really want the over- the- top experience without the matching price tag, up your borrowing game. Talk to friends and family members or put a call out on social media, asking to borrow the gear you need to feel like a true guru. If you feel like a heel bumming things from people, offer a barter system. For example, swap your lawn-cutting skills at a friend’s house in exchange for his fancy team tent and bench-sized cooler.

Cornhole, ladder toss, ring toss and bocce might be signature tailgating activities, but if you don’t have the equipment (or a friend from whom to mooch), then it’s game over. Instead of purchasing a new set to play, go for throwback backyard-style games such as tossing the football around or playing catch with a flying disc. Don’t like to move much? We get it! Instead, sit back with a game of sports trivia or find a group game to download as an app on your tablet or smartphone.

Compare two foldable lawn chairs–one plain and one with a team logo-and the evident difference will be in dollar signs. Instead of trying to deck out your party with official fan gear, use some DIY ingenuity and design your own custom cheering decor and apparel. Cut up worn-out T-shirts to make into banners. Draw the mascot on poster board with a complementing rah-rah line. Or spell out the team name with stick-on adhesive letters decorating dollar-store koozies to keep everyone’s brews chill.

As in “Bring Your Own Everything.” At the end of the day, a party is really about having a good time with the people invited. While it would be great if you could be the host with the most, providing everything to make the tailgating experience unforgettable, is really not the point. The point is to spend quality time together making memories that last a lifetime. Throwing a killer tailgate can be as simple as reaching out to the crew, naming a date and a time, and asking everyone to bring their own food, beverages, places to pop a squat, and good spirit to have the best day celebrating the home team.