The Best Drinking Games To Play at Parties 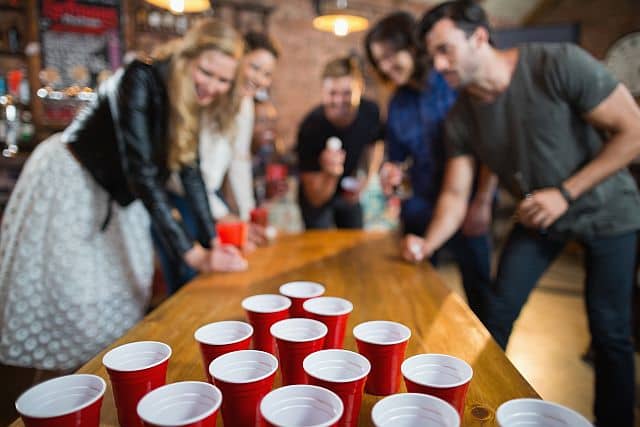 If you want to have some fun while celebrating the holidays, you can try playing some drinking games. These are the best drinking games to play at parties.

What better way to bring in the holidays than with a drink in your hand? If you have any upcoming celebrations for the holiday season, you will most likely bring a case of beer or a bottle of wine to the occasion.

Beer pong is one of the most well-known and classic games for drinking beer. If you have never played it before, all you need are a table, 10 plastic cups for each side (20 in total), and two ping pong balls to get started. Set up each side of the table with a triangle of cups like you would with billiard balls.

Place four cups on the edge of the table, then three in the middle, followed by two cups and one cup. After each side does this, teams take turns throwing the ping pong ball into the other side’s cups, and when the ball goes in, the other team must drink and take a cup away. Everyone has special rules for this game, but the basic setup remains the same.

Flip cup starts with getting an even number of team members for each side of the table and having them line up with someone on the opposite side of the table. After drinking beer from the cup, players from each team must use one hand to flip the cup and land it.

Players can’t start drinking until the last player flips their cup. The first team to have all players flip their cups wins. This is the perfect game to include more people if you want to throw the ultimate New Year’s Eve bash.

For this game, players will crowd around a table and place the cups in the center of the table. Two players on opposite sides of the table will start the game by bouncing a ping pong ball into the cup after drinking. Once they bounce the ball in, they pass the cup to the left, and the next player must bounce it in.

If the player before them in line bounces their ball into the cup when two cups line up in a row, they stack their cup into the other player’s. Anyone who gets the ball in on their first bounce can place the cup wherever they want (except stacking), so things can heat up quickly in this game!

Overall, these games are super exciting, but they can get messy. Now that you know the best drinking games to play at parties, you can ensure that your next celebration is one to remember (or not)!