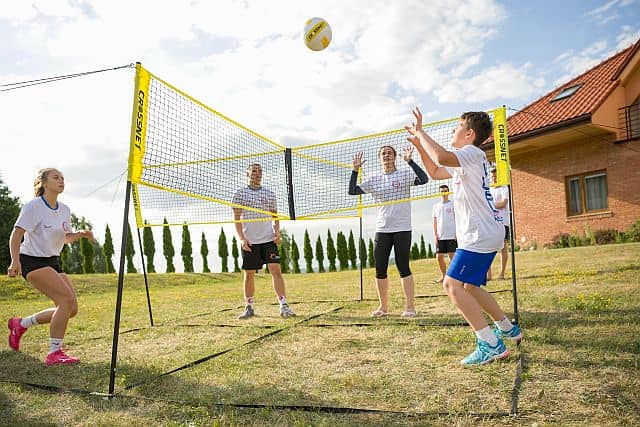 A tailgate, or backyard BBQ homegate party, is a great way to spend time with family and friends. Tailgate parties can extend the social aspect of a game day or concert or be enjoyed by themselves as a way to connect, experience nature, play some games and indulge in some food and drink with loved ones. As tailgate parties naturally take place outside, the weather can play a huge role in what activities are on the agenda.

Being prepared for all eventualities is an essential aspect of any successful tailgate party. If the sun is shining and the ground is dry, it’s easy to enjoy the day. If the weather is damp, people need to get a little more creative to be able to fully appreciate an outdoor party. Having a selection of games that can be played under shelter as well as those that require plenty of space can help ensure a tailgate party goes off with a bang, whatever the weather.

The football is often the catalyst for a tailgate party and therefore can form a central theme around which games can be based. One easy but enjoyable game is football bingo. One of the best aspects of this game is that it costs very little to make and can be tailored to the event, or to the family or friendship group playing. All it takes is one or more participants to create some bingo cards prior to the party. The bingo cards can be filled with a variety of common game-day occurrences such as penalties, cheerleaders or injuries. They can also be filled out with other, more personal items such as a family member uttering a favorite phrase or a “spot the product” section for commercial breaks.

Many people believe that smartphones have no place in the great outdoors. In some cases they would be right, as taking time away from screens can be a good thing, However, smartphones have also opened myriad doors for new opportunities for outdoor pursuits. One of the most popular is geocaching. Geocaching is a variation on treasure hunting, using an app and bringing together millions of players across almost every country in the world. New participants need only create a basic account for free and then use the GPS data on their phone to start searching for hidden treasure near their current location. Each geocache discovered has a logbook to sign and may contain some loot or trade items. The general rule is to leave something of equal value if items are found.

888 Poker has added a new “Play with Friends” feature to the online poker app. This makes it possible for groups of friends to get together and compete in a tournament online via their smartphones. It only takes one PC to set up the game, then other players can join in the online poker fun from their mobiles. Game days often leave people wanting to compete and gamble – playing poker with friends can help satisfy that urge, even when people have to stay under cover.

If the weather does permit playing games outside, Crossnet is a fun twist on traditional volleyball that allows for more teams to play at once. As the name suggests, the net in Crossnet is four-square, leaving four spaces for teams or for four individual players. The game can be played along the same lines as volleyball, or players can add their own rules as they go along.

Clandestine Anomaly is a smartphone app that lets players combine the great outdoors with augmented reality to turn their surrounding area into a fierce battleground in which they must battle intergalactic rivals to prevent the spread of the evil Leecher virus. The first four levels can be played for free to give new users an opportunity to check out the features. To progress beyond level four requires paying for the game, but also unlocks many additional features.

Bucketball is essentially a larger, more family-friendly version of beer pong. It can be played outside with any number of players in two teams. Bucketball sets come with clear instructions and regulations for play, including a designated court size and list of re-rack options. The game is relatively simple, with the aim being to fill all of the other team’s buckets first by landing their balls inside. If the weather means play has to move indoors, a version more similar to beer pong can be played with plastic or paper cups rather than buckets.

Many of the games that families love to play indoors are available in jumbo sizes to be adapted to outdoor play. Games such as Jenga, Connect 4, chess, draughts or snakes and ladders suddenly become infinitely more fun when played in giant size.

With so many game options for both indoor and outdoor play, it is easy to plan a tailgate party that will work under any circumstances. If everyone has waterproof clothing and there is plenty of shelter for the group, it can help to ensure that even if the heavens do open, a tailgate party does not have to be a wash-out.