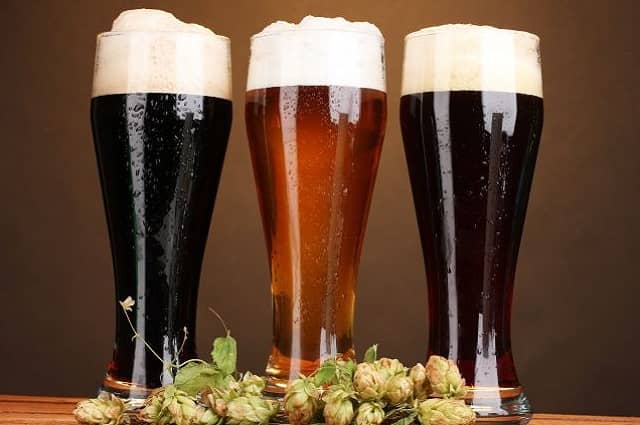 With the holidays in the rear view and dropping temperatures bearing down for real, try these seven beer styles to cut through the chill. Enjoy them while relaxing by the fireplace alone or while talking with friends at the ski lodge about the day’s epic runs. Mostly dark and complex—but not always—these winter beers are sure to warm you from toes to nose.

Among the darkest beer styles, stouts are a no-brainer for winter. They’re like a cozy blanket in a pint glass. Beer drinkers value their strong roasted flavors and versatile character, which leads to additional styles within the stout fold: American imperial stout, American stout, English-style oatmeal stout, milk stout and Irish-style dry stout. Stouts can be sweet, dry, smooth or bitter. This time of year, they also carry bourbon or chocolate overtones, and are also higher in alcohol content, often greater than 7% ABV. Imperial stouts climb to 9% ABV.

Similar to stouts, porters are dark, heavy and perfect for slowly drinking on a chilly afternoon. They come in different sub-styles and might also be aged in bourbon or whiskey barrels. They could be brewed with coffee or chocolate. Porters originated in England, but American brewers quickly put their own spin on them. The traditional English porter is now referred to as a brown porter. The Beer Judge Certification Program (BJCP) describes English porters, or brown porters, as being brown to mahogany with notes of chocolate and caramel. By comparison, robust porters carry a highly roasted malt flavor. Smoke porters begin as robust porters, but brewers smoke the malt with particular woods to impart flavors to the beer. Baltic-style porters have higher alcohol content than browns and are brewed with lager yeast. They carry fruity overtones, such as berries or plums. Finally, American imperial porters are deemed the most definitively American. They have no roasted barley or black malt flavors. Instead, they are defined by sweetness derived from cocoa and malt.

Although falling under the lager category, bocks have higher gravity and more toasted malt character (not caramel) than the lagers that typically come to mind. Hoppiness generally takes a back seat to the malt, and the beer is generally colored dark amber to dark chestnut. Found year-round, their prime season runs winter to Lent. A substyle of bock is eisbock, or ice beer. This concentrated, strong, high ABV German beer carries a completely different profile than American ice beers, which are lighter in color and alcohol.

Ones to try: Shiner Bock from Spoetzl Brewery, Kulmbacher Eisbock from Kulmbacher Brauerei in Germany, Pale Bock from Sierra Nevada in California.

Hibernate with one of these copper-to-very dark beers that tickles the palate with banana, caramel and cocoa-like flavors. Hop bitterness is on the medium-low end, and there’s just enough alcohol content to know ruddy cheeks might be around the corner. While many of the other winter beers lean toward clarity, dubbels show a bit of yeast haze.

Truth be told, lots of beers claim to be old ales, but some are truly old and some are not. Like other styles favored during snowy months, the roots of old ales are found in England. Beer drinkers from before the Industrial Revolution came to appreciate brews that had been housed in oak casks for a year or more, thus “old ale.” Today’s English-style old ales are recognized for their years-long aging process, notes of raisins and sweetness similar to port wine. The unofficial category of “winter warmers” often are some variation of old ales.

Many beers fall under the heading of IPA. Some are true India pale ales, but American IPAs don’t have the distinction of having ever gone to India nor are they always pale, as the BJCP guidelines point out. “However,” the guidelines say, “the term IPA has come to be a balance-defined style in modern craft beer…and a singular descriptor of a type of hoppy, bitter beer.” Within IPAs fall specialty versions, including white IPAs, pale-colored beers that have taken their place among the dark, heavy beers. White IPAs are fruity and may or may not be brewed with Belgian yeast, which can sometimes translate to them being called Belgian IPAs. In either case, the profiles come across as having the flavors of citrus or stone fruit paired with bitter hops.

No, it’s not a wine. This deep-red (American barleywine) to inky (English barleywine) beer gets its name from its alcoholic strength that is similar to wine. The ABV is usually greater than 10%, which is part of what contributes to its winter allure. It makes you feel toasty all over. Add in its intense, fruity, sweet or bittersweet, and complex profile, and this beer is meant to savor slowly as you sit by the fire and watch the snow fall.