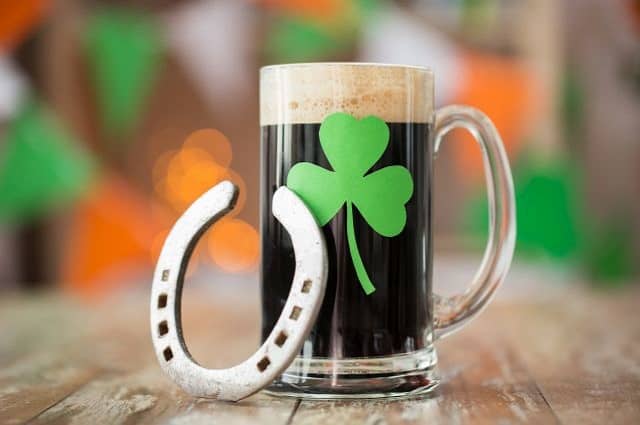 Revelers are ready for St. Patrick’s Day 2021. Last year, parades were cancelled and brewery/bar seating was limited if available at all. This year, some parades are marching as planned (Savannah, Georgia; Denver; Erin, Wisconsin, to name a few) and breweries in some states are allowed to open at increased capacity. Those who love this holiday can’t wait to don their green, wave shamrocks, and drink Irish beer. But what makes a truly Irish beer? According to the craft beer industry’s accepted guidelines, there are three beer styles of Irish origin: Irish-Style Red Ale, Classic Irish-Style Dry Stout, and Export-Style Stout.

Irish-Style Red Ale is colored as you would expect a true ginger to be: copper-red to reddish-brown. These beers have a medium body and are loved for their caramel-like sweetness and toasted malt flavors. Hoppiness? Not much. Their bitterness occupies the low to middle range of the IBU scale. Similarly, they’re lower in alcohol, making them an ideal session beer. While you’re sure to find an Irish red ale at your favorite brewery during St. Patrick’s Day, the style often is available throughout the year because it’s approachable for those new to craft beer. For an Irish-brewed original, look for Smithwick’s Premium Irish Ale, sometimes marketed under another label as Smithwick’s Red Ale, both imported from Dublin. For American-brewed versions, try Brian Boru by Indiana’s Three Floyds Brewing Co., Conway’s Irish Ale by Ohio’s Great Lakes Brewing Co., or Irish Ale by Missouri’s Boulevard Brewing Co.

No one can talk about Irish beer without mentioning Guinness, right? Well, that’s because it’s the popular model for Classic Irish-Style Dry Stout. Known for being black and having notes of coffee-like roastiness, thanks to the roasted barley and roasted malt, this beer style is meant to also carry a consistent, frothy head. (For a creamier head and smoother mouth feel, ask for the stout that’s on a nitro tap.) Drinkers should expect a higher level of bitterness to this Irish staple than its sister red ale. For perfect St. Patty’s Day happy hour, pair Guinness or any of the top-rated, American-craft brewed Irish-Style Dry Stouts—O.V.L. Stout by Russian River Brewing Co. in California, Cadillac Mountain Stout by Atlantic Brewing Co. in Maine, or Old No. 38 Stout by North Coast Brewing Co. in California—with Irish cheddar. Sláinte!

Export-Style Stout originates from Irish stout and shares some similarities in color and flavors. The difference lies in elements of Export-Style that make it bigger than its base in bitterness, which is sometimes countered by the sweetness of the malt, and in alcohol content. Export-Style Stouts range from 5.5% ABV (the high end for Classic Irish-Style Dry Stout) to 8%. Guinness gets in on the game with its Guinness Foreign Extra Stout, but so do some U.S.-based craft breweries, including Washington’s Pike Brewing Co. with its Pike XXXXX Stout, Wyoming’s Snake River Brewing Co. with its Zonker Stout, and Missouri’s Schlafly Tap Room with its Export Stout.