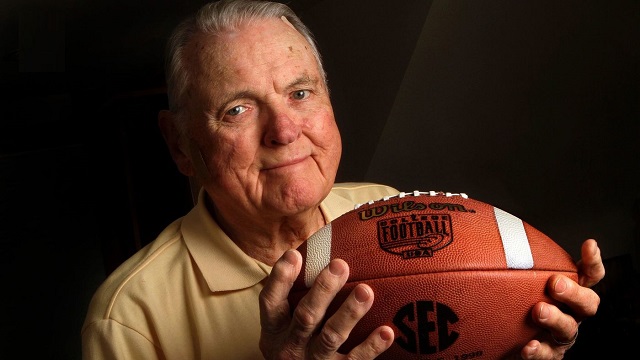 Regarded as one of the best sports announcers of all time, Keith Jackson passed away at the age of 89 on January 12 of this year, less than a week after the NCAA College Football Playoff National Championship game—an appropriate time, considering how intertwined he was with the game. While Jackson covered many sports for ABC over his 54-year career, working from the booth at a college football stadium is where he belonged. As far as this writer is concerned, Jackson was the voice of college football.

Jackson began covering college football games for ABC in 1952, only missing one college season to be part of the inaugural season of NFL’s Monday Night Football in 1970. During his career, Jackson called 16 Sugar Bowls and 15 Rose Bowls. He also, of course, coined many terms that became catchphrases, including his signature expression “Whoa, Nellie!”—an expression he claimed actually came from announcer Dick Lane—and others, like “fum-BLE” and “Hold the phone!”—a phrase he normally dropped following a penalty flag. He is also credited with first describing Michigan Stadium as “The Big House”—a name that has been synonymous with the stadium for decades.

Jackson, however, never relied on these catchphrases as gimmicks. The man, with his deep, resonant voice and perspective on life gained from humble beginnings in rural Georgia, could be downright moving in the way he spoke about his beloved college football. For example, this paragraph delivered by Jackson for, of all things, a highlight video for his alma mater, Washington State University:

“When one is making a first trip into the Palouse country, it might be easy to ask out loud, ‘Where is everybody?’ Especially if you come from an urban region, and out here in the rolling wheatland, it’s different. The air’s sweet, you can hear the birdsong, and the natural process includes all four seasons with gusto.”

Jackson’s career wasn’t free of a controversy or two, although the word “controversy” vastly overstates these minor faux pas. For instance, Jackson and his partner in the booth, Ara Parseghian, both missed Ohio State head coach Woody Hayes’ punching Clemson linebacker Charlie Bauman in the 1978 Gator Bowl. The incident took place at an angle not visible to Jackson in the booth, and with limited replay and no sideline reporter, Hayes’ actions went unmentioned during the broadcast, leading to accusations that Jackson was protecting the Buckeye coach from criticism. But, really, something this minor during a 50-plus year career tells you something about the professionalism and character of the man.

Jackson was among a group of television sports broadcasters, like Pat Summerall, Jim McKay, and Dick Enberg, who understood that TV is a visual medium and that it was unnecessary to fill every second of airtime with words. For instance, there is Jackson’s call of the 1994 Colorado-Michigan game. Down 26–21 with seconds to go in the fourth quarter, Colorado had time for one final play—a Hail-Mary bomb from the arm of quarterback Kordell Stewart that sailed 70 yards and landed in the arms of Michael Westbrook for the winning touchdown. Here is how Jackson described what would be known as the Miracle in Michigan:

“Three wideouts at the top of the picture. Stewart, with time. Lets it go! He’s got three people down there! The ball’s up in the air, caught! Touchdown! Caught by Westbrook for a touchdown! Incredible!”

On the field, pandemonium ensued as Buffaloes players began to celebrate wildly in the end zone, fans screamed at the tops of their lungs, and Michigan players left the field in dejection. From the booth, Jackson let 25 seconds fly by before speaking again.

“There is no time remaining,” he said, before allowing seven more seconds to go by. “There are no flags on the field. Only despair for the Maize and Blue, joy and exultation for the Buffaloes of Colorado.”

This is what set Jackson apart from his peers. He understood the game is about the players, the coaches and the fans, not the announcers. One never got the impression that he was practicing his snarky one-liners or funny quips in the mirror that morning in an attempt to make himself the story. Instead, his voice provided a soundtrack for the passion, the ecstasy and the heartbreak that is college football.

It’s ironic, then, that by trying not to be the story, he became the voice of the sport and was beloved by so many. He was cool under pressure, restrained when necessary, but uncanny in his ability to say the right thing at the right time with one of the richest and most distinctive voices in broadcasting.

Jackson retired following the 2006 Rose Bowl national championship game, when Vince Young led the Texas Longhorns to victory over Reggie Bush and the USC Trojans in what many consider the greatest college football game of all time.

Even though in January of this year, he had been away from the broadcast booth for more than a decade, his passing truly felt like the end of an era.

Whoa, Nellie, Keith! You were the best.