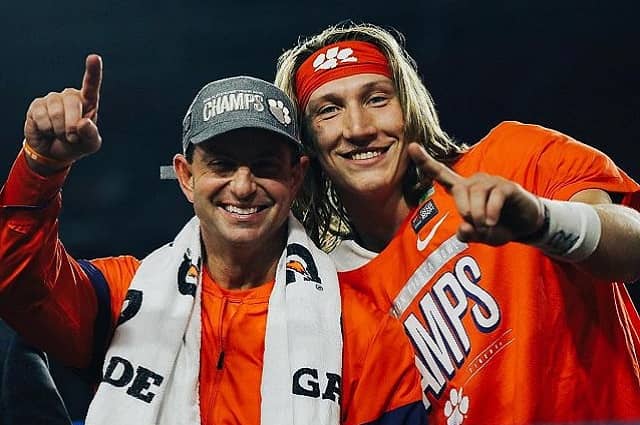 In College football, the name of the game is offense. Teams are scoring at a record-setting video game pace. The one thing that is constant with these high-flying machines is a good head coach and a good quarterback. Here are the top 5 combo packages for 2020.

Swinney and Lawrence don’t have much in common. Swinney embraces the role of overachieving underdog, whereas Lawrence has been a superstar since he became a teenager. Swinney has a conservative dad vibe, while Lawrence, with his long blond hair, stands out wherever he goes. Swinney is a straightforward salesman, and Lawrence embraces a quiet, private demeanor.

But what the pair shares is far more significant than their differences. First is the success. Lawrence helped Clemson to its second national championship in three years in 2018, and Swinney has taken the program to unimaginable heights.

Ohio State won the Big Ten and nearly knocked off Clemson in the College Football Playoff in Day’s first year as a head coach and Fields’ first season as a starting QB. That’s a pretty strong debut, and the relationship between coach and QB was at the heart of the Buckeyes’ success.

After a rocky freshman campaign at Georgia, Fields went in search of a new home, and he said that he instantly hit it off with Day, and by season’s end, Fields said that he was closer to his head coach than any man except his father.

That’s the foundation for a 2020 season where Fields is an early favorite to win the Heisman Trophy, and Day’s Buckeyes are as well-positioned as any team in the country to win it all.

For years, there was no better QB whisperer in the country than Fisher, who turned JaMarcus Russell, Christian Ponder, EJ Manuel and Jameis Winston into first-round draft picks. Struggles in his final years at Florida State shook the reputation a bit, but Fisher seems to have found his next great protege in Mond, who has accounted for 59 touchdowns and nearly 7,000 yards in the past two seasons.

After Vince Young and Colt McCoy made Texas a QB haven in the previous decade, the Longhorns’ offense disappeared from 2010 through 2017 as the team cycled through both coaches and quarterbacks. But the marriage between Herman and Ehlinger has revived the fireworks in Austin, and their offensive success over the past two years — 80 total TDs, 8,100 yards — is on par with anything Young or McCoy produced in their heyday.

Somewhere along the line last season, Row the Boat transitioned into Throw the Ball, and it worked out beautifully for the Gophers. Fleck’s offense jelled behind Morgan, who upended the traditional run-heavy attack in the Big Ten to produce the league’s first-ever pair of 1,000-yard receivers. Fleck, Morgan and one of those receivers, Rashod Bateman, are back for 2020, and the offensive fireworks figure to be just as explosive.