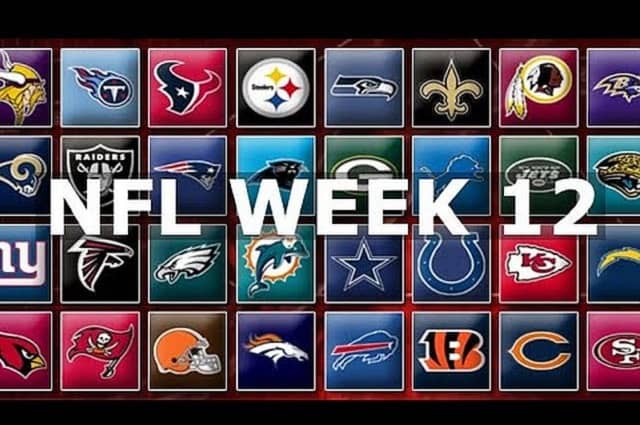 It’s Thanksgiving Week and that means there are tons of football games all week long in the National Football League. There are three games on Thursday, 12 on Sunday and a Monday Night Matchup as well. Playoff pictures are beginning to form and many of these teams are facing must-win games over the next few weeks if they want a shot at playing in January. Here are our Top 3 NFL Games for Week 12.

The early Thanksgiving games are both duds, but the evening turkey day game is a great matchup. This year, it’s a divisional rival battle that you don’t want to miss. The Steelers have remained undefeated and have been the surprise of the NFL season up to this point. Lamar Jackson and the Ravens are coming off two straight losses and they don’t look like the 2019 squad that dominated anyone that stood in their regular season path. Right now, they are 6-4 and sit behind the Steelers and Cleveland Browns in the AFC North. The Steelers defense forced four Lamar Jackson turnovers – two lost fumbles and two interceptions – the last time these two saw each other and it will be another gritty game this time. This is one of the most even matchups in football as each team has won five of the previous 10 meetings.  Nothing would make Ravens fans happier than to ruin a perfect season in Pittsburgh. The Steelers are favored by 4.5 points.

The national audience got a good look at both these teams last week as the Chiefs played on Sunday Night Football and the Bucs were on Monday Night Football. The Chiefs had a much better week, winning a back-and-forth game against the Las Vegas Raiders in the last minute of the contest to improve to 9-1 on the season. They’ve won five straight games and Patrick Mahomes has become the MVP frontrunner. The Bucs on the other hand are coming off a disappointing loss to the Los Angeles Rams where Tom Brady threw two interceptions, and the offense was abysmal in the second half. The Bucs are 5-0 in their last five games against the Chiefs dating to 1999, but this is a much different Kansas City team than the one they last played in 2016. The Bucs will need every bit of their top 5 defense to reign in the 2018 regular season and 2019 Super Bowl MVP to upset the Chiefs. Despite being the road team, Kansas City is favored by 3 points.

These two teams faced off against each other just two weeks ago and the Colts put on a dominant second half performance to win by 17. This week, both teams are coming off overtime wins against two good teams.  The Colts beat the Packers and the Titans defeated the Ravens.  The battle for the AFC South is as nasty as ever and this game is for first place in the division. The Colts defense limited Ryan Tannehill effectively in the first matchup.  A toe injury to Philip Rivers could limit his mobility, or force the Colts to use their backup quarterback, Jacoby Brissett, in this game. Brissett has only attempted five passes this season but does have experience as a starter. Indy is 7-3 in their last 10 games against the Titans and have also been dominant when playing them at home, winning 10 of the last 12 games on their own turf dating back to 2008. The Colts are favored by 4.