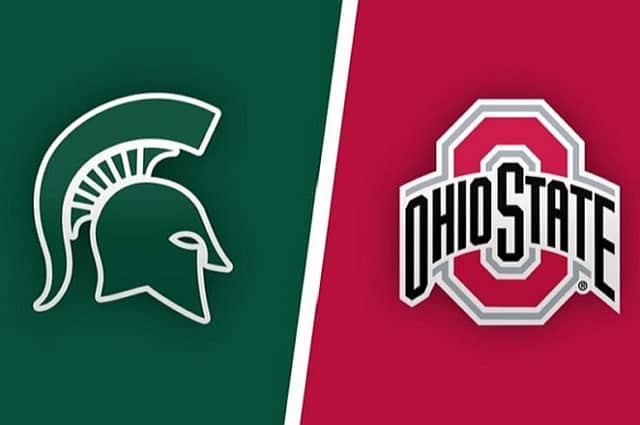 The Big 12 ruled the college football headlines in Week 11 as Baylor put a huge dagger in the Oklahoma Sooners CFP aspirations in Waco and Kansas got their first ever win in Austin. That loss continues the Texas Longhorns downward spiral as the Jayhawks broke a 56-game conference road losing streak that dated to 2008 with their “upset” win. The CFP currently has Georgia, Alabama, Oregon, and Ohio State as the four best teams in the country with Cincinnati standing at five. There are three weeks until final selections and each game means just a bit more. Here are our top three college football picks this week.

No. 7 Michigan State vs No. 4 Ohio State

I really feel like the College Football Playoff committee has gotten a lot wrong this season and ranking the Spartans behind Michigan, a team they beat earlier this season, is one of their biggest blunders. I think Michigan State is playing with a big chip on their shoulder and that is bad news for Ohio State. Unfortunately, I am not sure the talent levels truly matchup and there are few hotter teams in the country now than Ohio State. The Buckeyes haven’t lost a game since their week two slipup to Oregon and truthfully, no one has really come close. Many pundits thought Purdue would cause problems for the Buckeyes, but Ohio State went out and won 59-31. I think this game will be a whole lot closer, but the Buckeyes won’t lose. Prediction: Ohio State

Do I think Alabama will lose a game at home to Arkansas? No. Is it one of the only good Top 25 matchups in Week 12? Yes. Hey, crazier things have happened in college football this season and the Crimson Tide do already have a loss under their belts. The Razorbacks have three straight wins and are coming off a nice game against LSU, but Alabama is a whole other beast. Maybe the only thing working for Arkansas is that Bama might get caught looking ahead to Auburn next week, but I really don’t think Nick Saban allows his teams to get like that. In the last three weeks, Bama has scored 50 or more twice. LSU tripped them up a bit, but they still got the win and that’s all that matters. Arkansas will play this one a bit tighter than Roll Tide nation wants, but Bama wins. Prediction: Alabama

SMU vs No. 5 Cincinnati

I have been a Bearcat supporter the last two years, and I really hope that some scenario plays out where they are able to make the Top 4. But they must win out before that is even a possibility and this could serve as the ultimate trap game. The Bearcats have not necessarily played their best football in the past four weeks, and SMU is a team that can score points quickly and bury a team. They’ve won just two of the last four but kept it close against Houston and a very good Memphis team. I think SMU gives Cincy the ultimate scare in this game and might threaten their CFP chances more than anyone has this season. I can’t believe I am typing these words, but the Bearcats are due for a massive upset and the Mustangs are the team to do it. Prediction: SMU