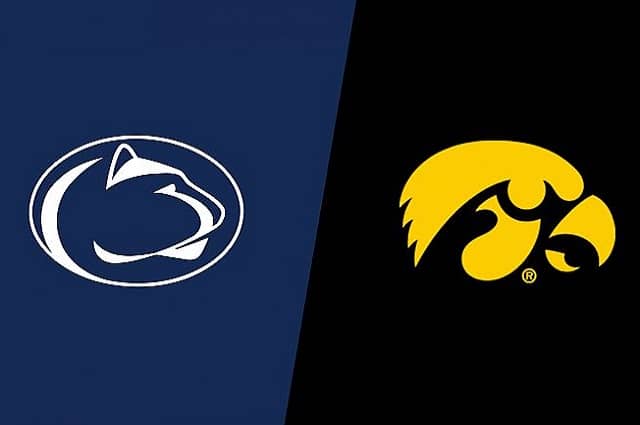 Chaos reigned supreme in week five of the college football season. For the first time since 2014, six Top 15 teams lost as the makeup of the AP Poll was shattered and beaten. We saw the two top teams in the nation show why they are ranked where they are, but after that, it wasn’t so easy for seemingly anyone else. For the first time in years, it seems like spots three and four in the eventual College Football Playoff could be occupied by two teams we don’t often see. Each and every week we are now expecting the upsets and that is what makes college football so fun. At any point in time, we can see David take down a Goliath and I can get on board with that. Here are the top three games in Week 6 of the college football season.

The Big 10 is loaded with talent and these two teams are the best in the conference. Both Iowa and Penn State could be on a path to the conference championship, but Week 6 is the first when one of them will be handed a loss. James Franklin’s Nittany Lions have shown that they have one of the premier defenses in the nation to this point. They’ve allowed 20 points to an opponent once this season and are coming off a shutout of Indiana. Big 10 showdowns are known for gritty, tough, defensive battles and this has all the looks of being just that. Iowa enters the game allowing no more than 17 points in a game this season while their offense is starting to find its rhythm. These two don’t always get all the Big 10 love that teams like Ohio State and Michigan get, but both are in the spotlight this week.  I think Penn State is slightly more talented, but this one will be close. Prediction: Penn State

There is something funny about two teams that colluded together now facing each other and being forced to act like they hate each other. Both teams will soon call the SEC home, but for now a Big 12 Championship is on the line and both want it. Texas has impressed this season and their most recent win over TCU was dominant. Casey Thompson wasn’t perfect, but Bijan Robinson practically was, and he will look to take aim at the Oklahoma defense. Spencer Rattler is becoming known for making Sooner fans sweat the outcome and Oklahoma has yet to have an overly convincing win against an FBS opponent. I think defense will play a bigger factor than we’d like it to in this game. I trust Lincoln Riley more than Steve Sarkisian at the moment, but I am not a believer in Rattler. Prediction: Texas

Georgia proved to everyone last week that they are the real deal, and many were calling for them to be the number one team in the nation instead of Alabama. They absolutely steamrolled previously unbeaten Arkansas.  Their offense clicked despite QB JT Daniels not playing due to injury, and their defense shut out a talented Razorbacks squad. Now they have a road game against an Auburn team coming off a fantastic comeback win against the LSU Tigers in Death Valley. While the talent levels are much different, there is a target on the ‘Dogs’ back and the Tigers are trying to chase them down. I expect a big Georgia win in this game, but maybe it is a tad bit closer than we’d think. Prediction: Georgia