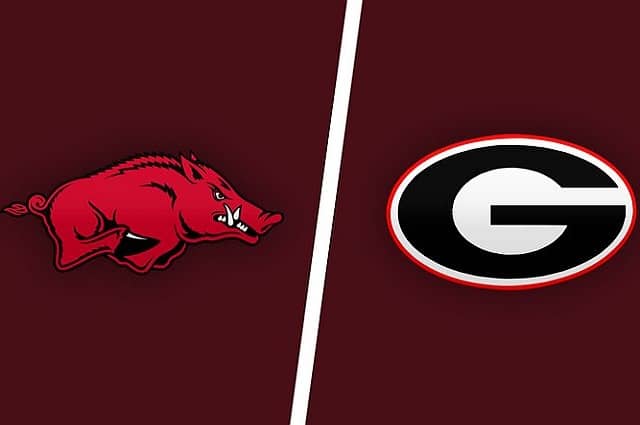 Week four of the college football season did not disappoint in the slightest. I am still sitting on my couch, where I watched all the games, with my mouth wide open in shock. There were some massive upsets with Clemson taking their second loss of the season, North Carolina blowing their ACC title hopes, Iowa State falling to Baylor, Texas A&M not getting the job done against Arkansas, and Wisconsin proving they aren’t legit Big 10 contenders. I don’t know if week five can come even close to what we got out of this week, but I can certainly hope. Here are the top three college football games in week five.

I have looked like a fool not believing in Arkansas twice already this season. I didn’t think they stood a chance against the Texas Longhorns or Texas A&M. Boy was I wrong, as the Razorbacks instilled their will right off the jump and came away with convincing wins in both contests. Now they’ll have to travel to Athens to face a Bulldogs team that hasn’t had much of a test since they took down what now looks like a very mediocre Clemson team in week one. Arkansas can score and they can score quickly, but their real strength has been on defense. That means a low scoring affair will take place as Georgia gets ready to show off their top-ranked defense. Call me crazy, but I’m going against the Razorbacks again. Prediction: Georgia

We must determine whether Notre Dame is coming off a really good win, or if Wisconsin just isn’t all that good. Notre Dame has looked like a different team in every week of this season. They can’t mess around this week with Cincinnati, who will sink them quickly as Desmond Ridder got back on track this week. Cincy has the 12th best scoring defense in the nation, and we have seen the Irish struggle to score in their game against Toledo earlier this season. These two squads have faced each other only once previously in their histories, a 58-0 Irish win in 1900.  As much as I love Cincy, I think this might be too much for them to steal a win on the road as the higher ranked team. Prediction: Notre Dame

I am shocked over how good the Baylor Bears have looked through four games this season. This offense is clicking, the defense is clicking, and I honestly believe that Dave Aranda is building something special in Waco. They already have shown they can take out a top-ranked team in Iowa State but now Oklahoma State is hosting the Bears as they come off a big win over Kansas State. OSU has an impressive defense as Mike Gundy moves away from an offensive heavy approach and the Bears might struggle if the run game doesn’t get started. I like the Bears, but not in this game. Prediction: Oklahoma State