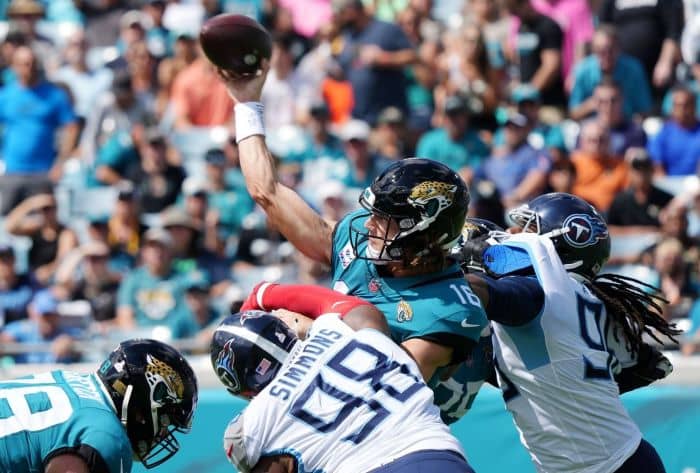 Week 17 in the NFL was unlike anything we’ve experienced in league history. The Bengals, Bills game was suspended due to a terrifying injury to Damar Hamlin which required CPR on the field. At the time of this writing, the league has not announced how that game will be scored or played out. Officially, Week 17 isn’t final, but we are moving on despite all of that. Week 18 has question marks because the Bills and Bengals have direct ties to the #1 seed in the AFC, and we don’t know how that will be impacted at this point. There are still plenty of great games and lots of teams battling for the three open postseason slots – one in the NFC and two in the AFC. Here are the top 3 2022 NFL games week 18.

These two teams found themselves in an extremely rare situation in Week 17 where a win or loss would not impact their playoff hopes. That’s not the case this week as the winner of this contest will be crowned the winner of the AFC South and the loser will be sent home for the offseason. It has been an extremely disappointing season for the Titans, who were the number one seed in the AFC last year.  Now they are trying to earn a playoff spot without their quarterback Ryan Tannehill. For the Jags, this season has exceeded expectations and is a total turnaround from the Urban Meyer debacle last year. With Doug Pederson at the helm, Trevor Lawrence has taken a massive step forward and looks like he will be the quarterback of the future that they were envisioning. This game will come down to whether the Titans can keep up on offense and given their recent struggles, and the fact that Josh Doubs is getting the start at QB, there isn’t a whole lot of confidence in the situation. Derrick Henry will truly need a career-day to make this one work. Prediction: Jaguars 28 Titans 17

The Seahawks have been one of the better stories in the NFL this season as they traded away their star quarterback and still have a chance to make the playoffs. The Rams have honestly been the biggest disappointment, turning in the worst record by a reigning Super Bowl champion that we have ever seen. There is only one open playoff spot in the NFC and to make the playoffs, Seattle must win this game and hope that the Detroit Lions beat the Green Bay Packers. There should be no reason as to why Seattle can’t put away an LA team that has had only one positive offensive output in the last five weeks and whose defense is severely banged up and damaged. I anticipate a beat down. Prediction: Seahawks 24 Rams 10

What is frustrating about this game is that it is being played after the Seahawks game. If Seattle wins, Detroit is going to know that it’s been eliminated from the playoffs before they even take the field. If that happens, the Lions can still spoil the Packers season with a victory.  If we want a winner-take-all game, then we are rooting for Seattle to lose earlier in the day, so that these two teams can battle for the final seed. After a 1-6 start to the season, the Lions have battled back to even their record at 8-8. At one point this season, the Packers found themselves at 4-8, but now have four consecutive wins heading into the final week of the season.  We never really know what to expect from Dan Campbell’s squad, but we do know that they are going to play hard. With a playoff position on the line, we know that Aaron Rodgers will be up for the task. Prediction: Packers 24 Lions 22