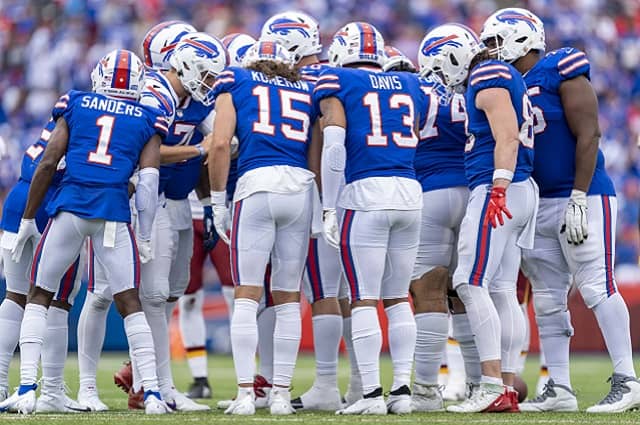 There were lots of surprises in Week 13 of the NFL season. The San Francisco 49ers lost their second starting QB for the year, Former number one overall pick Baker Mayfield was released, Joe Burrow and the Cincinnati Bengals won again, and Tom Brady reminded us yet again why he is the GOAT. Here are our top 3 2022 NFL games week 14.

This was an incredible game just a few weeks ago where the Jets upset the Bills in the final minutes, and it looked like New York was a legit player in the AFC East. A lot has happened since then. Zach Wilson is no longer their QB, they’ve lost two of three, and there was locker room drama galore. Now they’ve got to head to one of the most hostile atmospheres to face off against the Bills. Buffalo has won three straight and are finding ways to win despite a banged-up Josh Allen whose elbow looks affected by his nerve injury. I like Mike White and I think he makes this Jets offense far more explosive with his arm, but this seems to be no match against Allen who loves playing at home. Stefon Diggs will face a great secondary, but Justin Jefferson had his way against them last week. I think Buffalo gets revenge. Prediction: Jets 20 Bills 32

The NFC East is legit this year and it feels like it’s going to be tough for anyone not named the Eagles to pull off a division title. The Giants have been a pleasant surprise under first year head coach Brian Daboll. However, they haven’t won in almost a month, and settled for a tie against Washington in Week 13. The Eagles seem to just be heating up after their loss a few weeks ago to Washington. They dismantled Tennessee last week and Jalen Hurts is my MVP pick. These two teams will meet twice in the coming weeks and for that, I feel bad for New York as they try to stay in the postseason hunt. While the Giants have turned a lot of heads so far this year, it’s hard to imagine them out scoring this Philly offense which can seemingly score at any time with the skill players they have. Prediction: Eagles 28 Giants 20

The Dolphins and Chargers are both coming off losses last week. The Fins are in the hunt to win the AFC East, but their offense was totally shut down last week against the 49ers who rank first in the league. So, that wasn’t a total shock, and they could rebound nicely against a Chargers squad that’s given up an average of 27 points per game the last three weeks. The Chargers are struggling with injuries and getting Justin Herbert his weapons back is the only way this team is going to jump back into the postseason conversation. For a guy we’ve fallen so in love with, he doesn’t win nearly as much as we would like him to. This game will be played in LA and is the second straight West Coast game for Miami. That kind of travel can wear on a team. Prediction: Dolphins 30 Chargers 33