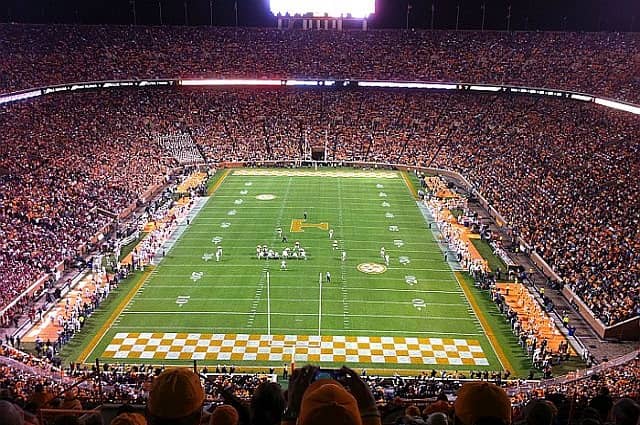 Last week was a great week of college football where upsets (almost) ran wild. The best was clearly between A&M and Alabama, as The Tide came “this close” to losing to Texas A&M for the second year in a row. However, Aggies QB Haynes King came up just short (or I guess high) on the final play of the game. We are getting closer and closer to CFP polls coming out and this week has plenty of interesting games on the line.  Here are our top 3 2022 college football games week 7.

No. 3 Alabama Crimson Tide vs No. 6 Tennessee Volunteers

Everyone wants to know if Texas is back, but I am way more interested to know if the original UT is back? What a great spot this is for the Vols who get Bama after an emotional roller coaster this week and potentially without Bryce Young. Nick Saban is hopeful his Heisman-winning QB can return for this game, and he will definitely need him. Tennessee has a high-powered offense that has had no issues scoring on teams like Florida, LSU, and Pittsburgh. Can they score on Bama will be the question, but I feel better about the Vols playing at home, especially if Young can’t go. Everything will come down to that position for Bama, and if he is a no go on Saturday, watch out. Gameday is coming to Knoxville and this one should be wild.  Prediction: Alabama 27 Tennessee 24

No. 8 Oklahoma State Cowboys vs No. 13 TCU Horned Frogs

Sonny Dykes has quickly emerged as one of the top candidates for coach of the year at TCU as he has his team undefeated and coming off a road-win over ranked Kansas. This offense, led by Lincoln Riley’s younger brother, is LEGIT. They can put up points quickly and OSU has shown us that this defense is not what it was last year. The Cowboys really struggled against Tech last week and an upset seemed to be brewing for quite a while until late in the 4th quarter. This could be the first blow to a Big 12 team looking to slide into the College Football Playoff. I really like the makeup of this TCU team and having the home atmosphere is the big key in this game. If they can slow down Spencer Sanders, who is having a phenomenal season, I like TCU in this one.  Prediction: Oklahoma State 32 TCU 36

Two top 10 matchups in one week? Music to our ears. Speaking of the College Football Playoff, this one seems important. Both teams enter this one undefeated and the Big 10 seems rather weak this year. It might take just a win here and a win over Ohio State to reach the playoff. Heck, you might even be able to reach it with a loss to OSU mixed in there as well. Neither of these teams have necessarily jumped off the screen to me. The Wolverines have played some really tight games this year and I wouldn’t allow last week’s final score to deceive you. Penn State on the other hand has one of the top defenses in the nation this year. They’ll need it in full force this week.  Prediction: Penn State 22 Michigan 20