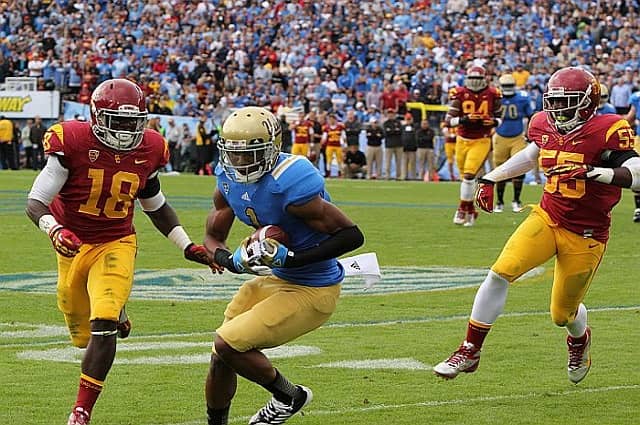 Only two weeks remain in the college football regular season and the hunt for the College Football Playoff is heating up. There are just two Top 25 matchups but plenty of contests where upsets could be on notice and CFP spots could be in jeopardy. Here are our top 3 2022 college football games week 12.

Can a one-loss Pac-12 team make the College Football Playoff? It’s doubtful. However, USC’s lone loss came against Utah. The #10 Utes will play #12 Oregon who is coming off a loss to Washington, Pac-12 cannibalism at its finest. If USC beats UCLA in this game, they will improve to 10-1 with one contest left against a likely ranked Notre Dame team. Their resume has been relatively impressive, but this week is critical. The Bruins’ big losses to Oregon and Arizona shot them down the rankings, but this is still a very well-coached 8-2 team that has the capability to pull an upset. USC’s weakness has been their defense which has allowed massive points at times. Sounds like a Lincoln Riley coached team, yeah? UCLA has the 5th best offense in the nation and can score points at will it seems. Home-field advantage doesn’t really exist at UCLA, but I like the upset in this game thanks to Conference of Champions craziness. Prediction: USC 35 UCLA 38

Yes, I know – Baylor was practically crucified at home last week against Kansas State but it doesn’t change the fact that TCU is in the College Football Playoff hunt and currently would own a spot. Big Noon Kickoff is coming to Waco for this game, it’s the second straight week where a national pregame show will be at a TCU game as they play on the road. The last time Big Noon Kickoff showed up, the Bears upset Oklahoma which helped send them to the Big 12 Championship. Kansas State shut down a Bears offense that had been high-powered up to this point. The real question is how many points TCU will put on Baylor and can their offense bounce back in this game to keep it close. I think they can keep this one close until the Horned Frogs pull away in the 4th quarter. Prediction: TCU 32 Baylor 24

Illinois vs No. 3 Michigan

For a second straight year, Jim Harbaugh’s team looks like they can make it to the College Football Playoff, but they have a brutal final two weeks of the regular season. This week, they have to face off against Illinois who may be the pleasant surprise of the Big 10 thus far but are coming off two straight losses to Michigan State and Purdue. Illinois hasn’t faced a team of Michigan’s makeup so far, but once again, we are in the final weeks of the season, and anything can happen. The Wolverines will be doing everything to prevent that from happening. Their offense has been cooking in the last few weeks, but it’s really been their defense that’s made the difference. Harbaugh’s squad has allowed less than 20 points in all but one game this season. Michigan plays Ohio State next week and fans of the Big Blue will have to hope they don’t get caught looking ahead. That shouldn’t be a problem. Prediction: Illinois 17 Michigan 33