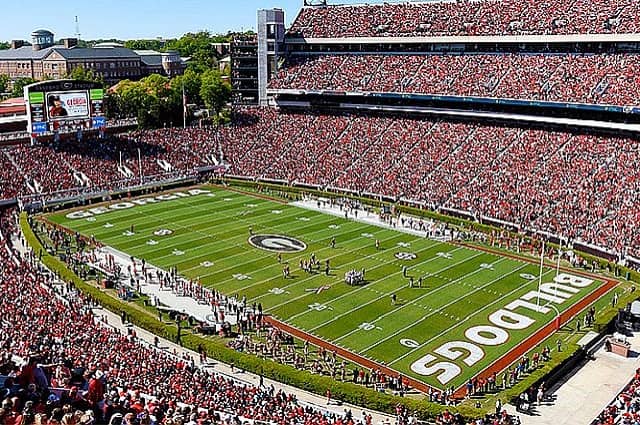 Buckle in, college football fans. It isn’t every year that we get a 1 vs 2 in the regular season so this week should be a real treat. Just three other Top 25 matchups exist this weekend, but there are plenty of great games to keep an eye on that could send some teams flying through the rankings. Here are the top 3 2022 college football games week 10.

How great is this? Two SEC powerhouses are going to battle. One hasn’t been on this stage in a while and the other is used to basking in it the last few years. The Vols are America’s team right now, no doubt about it. Last week’s game against Kentucky was their second biggest challenge of the season and they passed with flying colors. It was domination from start to finish and you cannot deny their quality wins at this point. As for Georgia, they have tripped at times this year but not enough for it to make a difference. They are coming off a beatdown of the Florida Gators and you know this team doesn’t want to drop a game at home as the AP top ranked team. This should be a game that we talk about for a long, long time. Prediction: Tennessee 28 Georgia 30

This is the first time that Brian Kelly will face off against Nick Saban as the head coach of the LSU Tigers. Alabama has pretty much dominated this series over the last decade. This Alabama team has been interesting to watch, as they’ve been unable to dominate lesser opponents as they typically do. Bryce Young came into the season with the Heisman winning hype of being the best QB in college football. However, the Tide has struggled some and he’s been injured. LSU on the other hand started slowly this season before gaining steam over the last few weeks. Knocking off Mississippi in a big way was the public acceptance they needed to make a big jump in the rankings, and they got it. At the end of the day, I don’t like going against Saban and I don’t think LSU’s quarterback play has warranted a legit reason to think they will pull off the upset in this contest even though the game is in Baton Rouge. Prediction: Alabama 30 LSU 14

Here we have two ranked ACC schools facing off in this matchup. The issue for both schools, as they look for a path to win the ACC, is that Clemson and Syracuse currently occupy the first and second spots in the standings of the Atlantic Division. Both teams need a win in this game and more importantly, they need Clemson to start losing. I am not sure that will happen, but this should be a fun ACC battle regardless. I’m going with the home team in a tough conference matchup. Prediction: Wake Forest 17 NC State 21